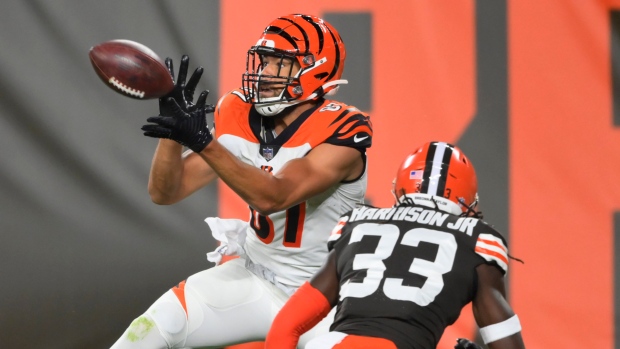 Cincinnati Bengals tight end C.J. Uzomah had quickly emerged as a favourite target for top pick Joe Burrow through the first two games, but it appears he's going to miss quite some time after sustaining an Achilles injury Thursday night.

NFL Network's Ian Rapoport told Good Morning Football that the Bengals fear Uzomah's Achilles tendon is torn which would put him out for the season.

From @GMFB: The #Bengals may have lost TE C.J. Uzomah for the season... while #Saints star WR Michael Thomas (high-ankle) did not practice yesterday but hasn't given up hope for Monday. pic.twitter.com/XHLhRLZJO6

He is scheduled to have an MRI on Friday after Thursday's diagnosis was not 100 per cent conclusive with regards to a tear, reports Rapoport.

Uzomah was slated to see an increased workload in the Cincinnati offence this season after Tyler Eifert's departure to the Jacksonville Jaguars. He caught four passes for 42 yards and a touchdown before leaving in the Bengals' 35-30 loss to the Cleveland Browns to open Week 2.

Second-year tight end Drew Sample, who is expected to assume most of Uzomah's duties should be miss time, caught seven passes for 45 yards.

The Bengals will be back in action in Week 3 against the Philadelphia Eagles.