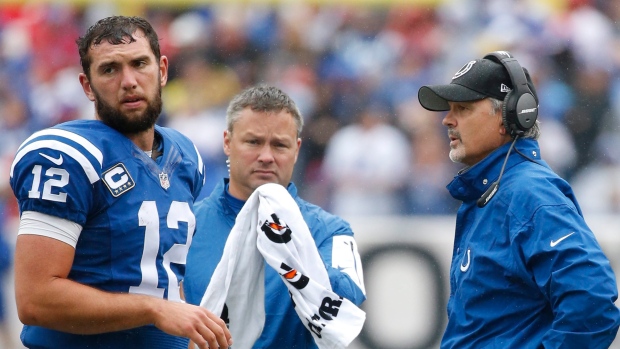 When asked about Luck dealing with defensive pressure after the Colts’ Monday night loss to the New York Jets, Pagano said, "That's been the case for three years now, has it not? He should be more than comfortable dealing with what he's dealing with."

That was apparently praise for the former first overall draft pick.

"Really, it was complementing our quarterback is what I was doing there," Pagano said on Tuesday, according to ESPN. "You guys know how many different lineups we've had because of injuries and this, that and another. That's well documented over the last three years and the way he's been able to perform and lead this football team. Eleven wins three straight years and playoff wins.

"We have one hell of a quarterback. We have a great player and a great leader there. But again, it was more like, 'Hey we're lucky we have Andrew.' "

The Colts offensive line has struggled during Luck’s tenure in Indy, and Grigson raised some eyebrows at the draft in April by taking receiver Phillip Dorsett in the first round over more pressing needs.