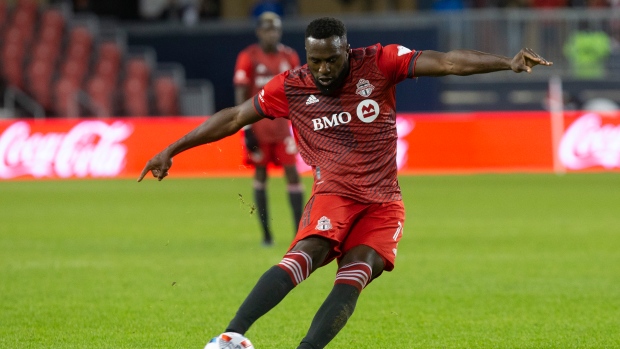 The man whose goal won Toronto FC its only MLS Cup is on the move.

Back to the NBA trade deadline momentarily ... but some key @MLS news first:

Altidore, 2017 MLS Cup MVP with Toronto, is expected to join the Revs later this week.

Altidore was acquired by Toronto in January of 2015 from then-Premier League side Sunderland in exchange for striker Jermain Defoe.

Altidore scored 13 goals in his first season, 10 in 2016 and 15 in 2017 where he was an integral part in helping TFC capture the Supporters’ Shield as well as the MLS Cup for the first time in franchise history. Altidore scored in the 67th minute of the final against the Seattle Sounders and was named MLS Cup MVP in TFC's 2-0 victory.

Altidore needed surgery to remove bone fragments in his foot that season, missing a considerable portion of the schedule as TFC missed the MLS Cup playoffs.

Altidore scored 11 times in 2019 as TFC returned to the MLS Cup for the third time in four years before ultimately falling to the Sounders for a second time.

Internationally, Altidore has been capped 115 times by the USMNT and played in two World Cups. He has 42 international goals.