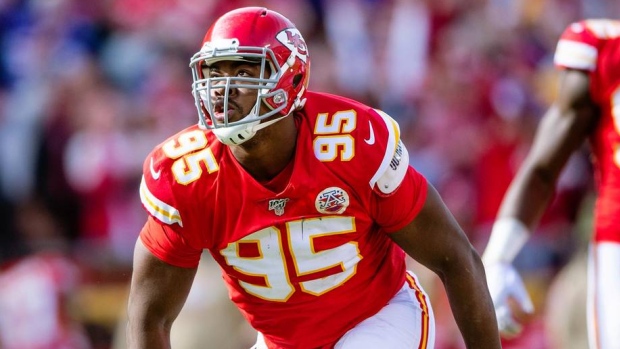 KANSAS CITY, Mo. — The Kansas City Chiefs and Pro Bowl defensive tackle Chris Jones agreed to a four-year contract that could be worth up to $85 million on Tuesday, the latest in a lavish spending spree by the Super Bowl champions as they continue to lock up their core pieces as training camp approaches.

The deal for Jones, which comes on the heels of a record-setting 10-year extension for quarterback Patrick Mahomes, includes $60 million in guarantees, a person familiar with the terms told The Associated Press. The person spoke on the condition of anonymity because the Chiefs had not announced the extension.

The two sides had been working on an extension since last year. But they were never very close, even when Jones showed his displeasure by skipping the entirety of the off-season program — including the mandatory summer minicamp.

Jones returned in time for training camp, though, and his unique ability to rush the passer from the interior of the defensive line was instrumental in helping Kansas City beat the San Francisco 49ers to win its first Super Bowl in 50 years.

Jones said afterward that he wanted to help the Chiefs establish a dynasty, but the euphoria of that victory in Miami soon wore off. Contract negotiations continued to stall and the Chiefs had to buy time by placing the franchise tag on Jones, and establishing a deadline of Wednesday for working out a deal.

And once the contract with Mahomes was done, the Chiefs had a better idea of their salary cap situation and that allowed negotiations with Jones' representatives to pick up.

“Listen, I think (general manager) Brett Veach has done a nice job of getting and retaining our players," Chiefs coach Andy Reid said recently, “and that’s not an easy thing to do with the way the salary cap is set up in today’s world.”

The length of Jones' contract works out for the Chiefs in that it expires before the big-money years begin for Mahomes, whose baseball-like contract could surpass $500 million total over the 12 years that he is under contract.

Jones certainly has earned his own impressive financial haul during his first four seasons in the league.

The second-round pick in the 2016 draft started 11 games and had two sacks as a rookie, then bumped that total to 6 1/2 sacks in Year 2. But it was the 15 1/2 sacks that he piled up while helping the Chiefs to the AFC title game in 2018 that really raised eyebrows, and put the Chiefs in the position of trying to hammer out a long-term contract for him.

Jones had another nine sacks last year despite missing three games with injuries, putting himself in an elite tier of interior pass rushers that includes Rams standout Aaron Donald and the Eagles' Fletcher Cox.

Jones hinted several weeks ago about holding out all season if the sides were unable to agree to a long-term deal. But his posts on social media over the past week had grown increasingly optimistic, and tweets over the weekend that said “I love you KC” and “vibes are unmatched” were taken by some as a sign that an extension was close.

“Got my boi locked up!” Mahomes tweeted Tuesday, when news of the deal broke. Mahomes then alluded to the fact few thought it would get done given the Chiefs' tight financial situation when he tweeted, “And yall thought we couldn’t...”