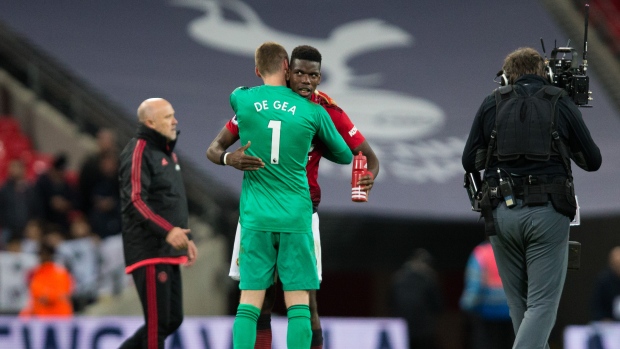 Manchester United will be without the services of both David De Gea and Paul Pogba when the club hosts league-leading Liverpool on Sunday at Old Trafford, reports The Telegraph's James Drucker.

The Spain goalkeeper picked up an injury on Tuesday in a EURO 2020 qualifier against Sweden, while the France midfielder is still dealing with an ankle injury that has kept him out of five of the Red Devils' last seven matches.

De Gea pulled up with an apparent hamstring ailment after a clearance during the 1-1 draw and needed to come out of the match, replaced by Chelsea 'keeper Kepa Arrizabalaga. He was able to leave the pitch under his own power.

While the injuries to De Gea and Pogba will alter manager Ole Gunnar Solskjaer's plans, he is expected to have all of forward Anthony Martial and defenders Aaron Wan-Bissaka and Victor Lindelof available for selection after the trio had missed out on recent matches with injuries and illness.

The Red Devils are currently mired in their worst start to a campaign in over 30 years and sit 12th in the table. United is winless in its last three league matches, losing two of the three.

Liverpool comes into the match a perfect eight-for-eight in the league and the European champions currently sit eight points clear of Manchester City atop the table.