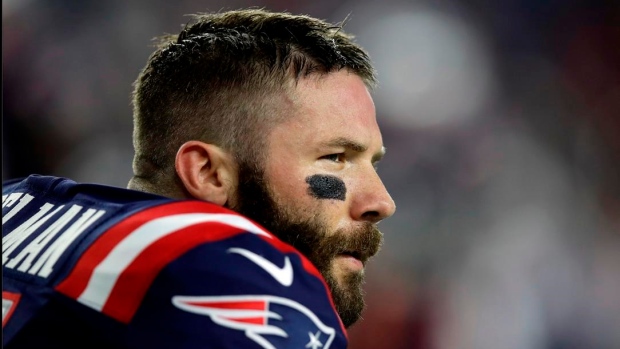 Patriots star receiver Julian Edelman, who helped New England win three championships and was the MVP of Super Bowl LIII, announced his retirement from the National Football League on Monday.

Edelman, who turns 35 next month, was limited to six games last season because of a chronic knee injury. He spent his entire 12-year career with the Patriots and ranks second in NFL history with 118 postseason receptions, behind only Jerry Rice's 151.

One of Edelman's signature plays was an improbable diving catch in Super Bowl LI, helping the Patriots overcome a 28-3 second-half deficit to rally past the Atlanta Falcons. Two years later in a victory over the Los Angeles Rams in Super Bowl LIII, he was named MVP after totaling 10 receptions for 141 yards.

Few would have predicted that when the Patriots selected Edelman in the seventh round of the 2009 draft -- 232rd overall. Edelman was a quarterback at Kent State, with his running skills and quick-cutting ability catching Bill Belichick's eye as a possible receiver/punt returner.

Edelman was still playing at a high level last season, totaling a career-high 179 yards in a Week 2 loss to the Seahawks. But the nagging knee injury ultimately landed him on injured reserve in 'late October, and while there was hope he might return late in the season, he wasn't healthy enough to be activated.

Because of his health, the Patriots went into the 2021 offseason unsure of Edelman's status, which contributed to them agreeing to contracts with receivers Nelson Agholor (two years, $26 million, with $15 million guaranteed) and Kendrick Bourne (three years, $22.5 million, with $5.25 million guaranteed) on the first day of free agency. Edelman was also entering the final year of his contract.

Edelman's clutch postseason play is reflected in his six games with at least 100 receiving yards, tied with Michael Irvin for second all-time (Rice is first with eight).

The Patriots also tapped into his old quarterback skills with success, with Edelman completing 7-of-8 passes over his career for 179 yards, with two touchdowns and a perfect 158.3 passer rating (includes playoffs).

Against Denver last October, Edelman joined running backs Andy Johnson (Sept. 6, 1981 vs. Baltimore) and Dick Christy (Nov. 18, 1960 vs. Dallas Texans) as the three Patriots non-quarterbacks who have completed two passes in a game.

In the latter stages of his career, Edelman, of Redwood City, California, publicly embraced his Jewish identity, taking pride in becoming the first Jewish player to be named a Super Bowl MVP.

In July of 2020, he invited receiver DeSean Jackson to the United States Holocaust Memorial Museum in Washington, D.C., after Jackson's anti-Semitic social media posts. This past March, he wrote an open letter to Miami Heat center Meyers Leonard about Leonard's use of an anti-Semitic slur during a video game livestream.