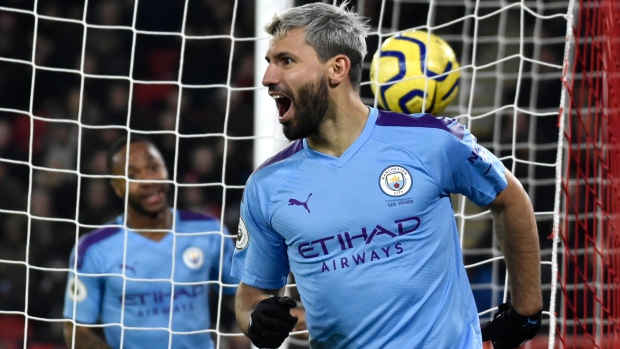 When Manchester City announced last week that talisman Sergio Aguero would be leaving the club after a decade following the conclusion of the current season, initial expectations had the 32-year-old Argentina international plying his trade with a giant on the continent next season.

But not so fast.

While Aguero will consider moves to clubs like Barcelona, Juventus or Paris Saint-Germain, The Evening Standard's James Robson reports that Aguero's preference is to remain in England.

Aguero's 181 Premier League goals make him the active goals leader and fourth all-time. He needs just seven goals to pass Manchester United legend Andy Cole for third spot. Wayne Rooney sits second with 208 and Alan Shearer is the all-time leader with 260. Making an assault on these marks could motivate Aguero to stay in England with the likes of Chelsea and Tottenham Hotspur expected to make offers for the four-time Premier League winner.

One place Aguero is highly unlikely to go is Old Trafford.

On Sunday, Manchester United manager Ole Gunnar Solskjaer ruled out a move for Aguero out of respect for crosstown rivals City.

"I know we’re professionals, but when you play for Man United you don’t go to Man City," Solskjaer said. "We’ve had examples of that and I didn’t really agree with it. When I played for Man United, if a rival club tried to sign me, and I had gone - well, where’s the loyalty? Loyalty is one of the values I really, really put highly."

City returns to action later on Tuesday when they take on Borussia Dortmund in the first leg of their Champions League quarterfinals tie.