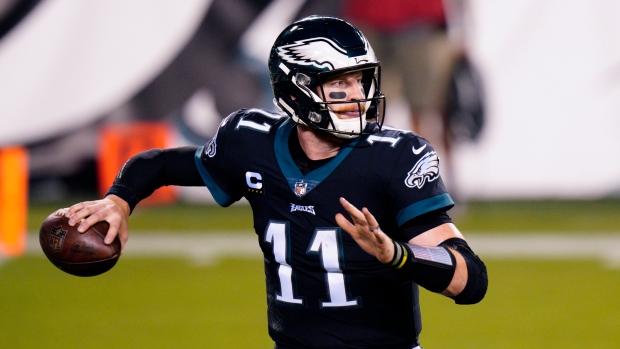 Philadelphia has agreed to trade Carson Wentz to the Indianapolis Colts in exchange for a 2021 third-round pick and a conditional 2022 second-round pick that could turn into a first, league sources tell @mortreport and me.

NFL Network's Mike Garofolo reported the conditional second-round draft pick becomes a first-round pick if Wentz plays 75 per cent of the Colts' snaps in 2021, or 70 per cent and the Colts make the playoffs.

The conditional second-rounder in 2022 becomes a first-rounder if Wentz plays 75 percent of the snaps or 70 percent and the team makes the playoffs. https://t.co/quAYwcz7bd

The move comes less than two years after Wentz signed a four-year, $128 million contract extension in June of 2019 and in the midst of an off-season of major change for the Eagles, who fired Super Bowl-winning head coach Doug Pederson last month.

Wentz threw 16 touchdowns compared to a league-high 15 interceptions in 12 starts this past season before losing his starting job to rookie Jalen Hurts down the stretch of the regular season. Philadelphia was 3-8-1 in games he started.

The 28-year-old played five seasons in Philadelphia after being selected with the No. 2 pick in the 2016 NFL Draft out of North Dakota State.

The Eagles will now enter a new era with Hurts at quarterback under recently hired head coach Nick Sirianni.

The Colts secured their quarterback after last year's starter, Philip Rivers, retired at the end of the season.