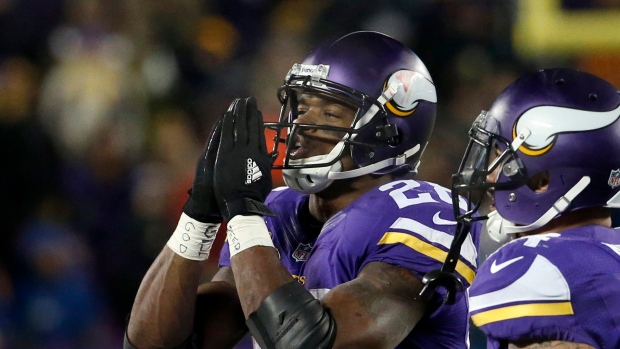 NEW ORLEANS — The New Orleans Saints and free-agent running back Adrian Peterson have agreed on a two-year contract.

The deal means Peterson, a 10-year veteran who has posted seven 1,000-yard seasons with Minnesota and once eclipsed 2,000 yards, could become a backup running back on an offence that tends to pass more than run.

Still, Saints coach Sean Payton said Tuesday that he envisions a productive role for Peterson, who is coming back from a 2016 meniscal tear that required season-ending knee surgery after only three games.

"It's rare and unique to have the opportunity to add a (potential) Hall-of-Fame player to your roster. His career has been top-notch," Payton said in a statement provided by the club. "We think he will be an excellent fit in our locker room and in our offence."

The agreement was first reported early Tuesday when Peterson provided a statement to ESPN.

"It goes without saying that the Saints are really solid behind Drew Brees. I feel like my skill set can make them even more dominant (offensively)," Peterson said in his statement. "They have a great offensive line, which is something that stood out to me as well."

Peterson, 32, has spent his entire NFL career with the Vikings. His career-best 2,097-yard rushing season in 2012 came one season after he had reconstructive knee surgery to repair a torn ACL.

Over the past three seasons combined, Peterson has played in only 21 games, including one playoff loss. He missed all but one game in 2014 because of a child abuse case in which he pleaded guilty to misdemeanour reckless assault. The victim was his son, then 4 years old.

Now Peterson joins a Saints backfield led by running back Mark Ingram, who is coming off one of his best seasons and is New Orleans' incumbent starter. Ingram rushed for 1,043 yards in 2016 and made 46 catches out of the backfield, helping Brees lead the NFL in passing with 5,208 yards.

Peterson, too, has a history of contributing as a passing target out of the backfield, surpassing 200 yards receiving in a season five times, including 436 yards in 2009.

In his statement, Peterson didn't seem concerned about how frequently he'd get the ball in the Saints' system.

"I could tell from talking to head coach Sean Payton over the last two weeks that he did his due diligence in evaluating how I could contribute," Peterson said.