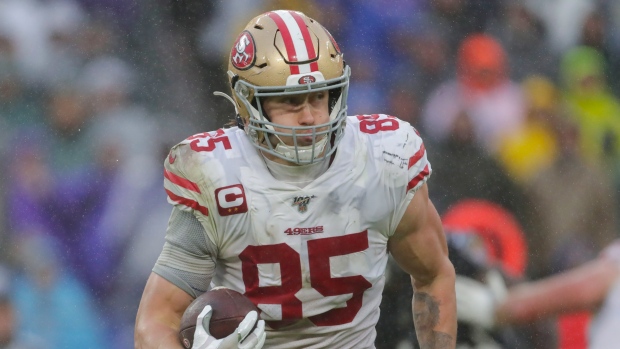 The San Francisco 49ers and two-time Pro Bowl tight end George Kittle are far apart in their negations for a new contract for Kittle, per the NFL Network's Mike Silver.

The @49ers and @gkittle46 remain far apart on a contract extension... and Kittle's agent says a 'tight-end deal' is a non-starter. @nflnetwork @NFLTotalAccess pic.twitter.com/pAOqDbu5KL

Silver reports that the two sides haven't talked over the last couple of months after engaging in preliminary discussions in February. According to Silver, it is unclear how much the effects of the ongoing COVID-19 pandemic are having on the negations or whether the two sides simply just cannot agree on a deal.

Kittle's agent, Jack Bechta, per Silver, intends to have his client paid above the going rate for tight ends. Last season, the 26-year-old Kittle led the Super Bowl runner-up 49ers in all major receiving categories.

Despite the halt in their contract talks, the 49ers want to retain Kittle, according to Silver, and the tight end also would like to remain with the team.

Kittle is under contract for the 2020 season, but is scheduled to be an unrestricted free agent in 2021.