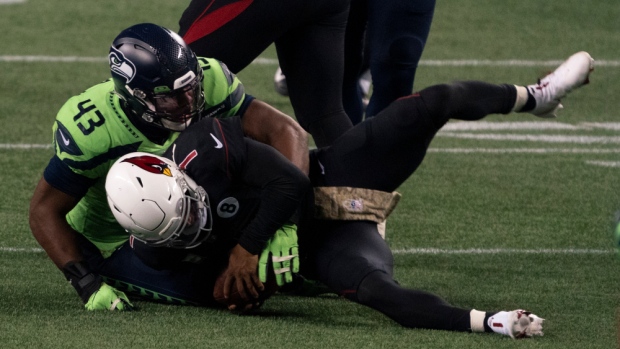 The move clears $14.1 million in badly needed cap space but leaves the Seahawks without their most accomplished edge rusher and two-time Pro Bowl selection. The team is expected to attempt to re-sign Dunlap at a discounted rate once he tests his market.

Dunlap, who turned 32 in February, was scheduled to count $14.1 million against the cap in the final year of his contract, which had no remaining guaranteed money. That cap charge included a $3 million bonus he would have earned had he remained on Seattle's roster by March 21.

The roster bonus was added to Dunlap's contract as part of a restructure he agreed to in order to facilitate his trade last October from the Cincinnati Bengals. Dunlap helped ignite the Seahawks' staggering pass-rush by recording five sacks and 15 QB hits in nine games, including playoffs. He missed one game with a foot injury that he played through for part of his time in Seattle. He had six tackles and four passes defended with the Seahawks.

OverTheCap.com and Roster Management System listed the Seahawks with below $8 million in salary cap space before Dunlap's release, one reason why that move was not a surprise.

Dunlap spent his first 10-plus seasons with Cincinnati, which drafted him in the second round in 2010. His relationship with the team became strained as he grew frustrated with his role on defense last season, leading to his trade to Seattle in exchange for a seventh-round pick and backup offensive lineman B.J. Finney.

Dunlap openly gushed about the Seahawks organization after his trade, saying he felt rejuvenated in his new setting.

"I'd love to stay in Seattle as long as they'll have me," he said after the Seahawks lost in the wild-card round. "It was very clear what I was coming here to do and what my timespan would be, so now it's a conversation and I'm open and welcoming for it. You guys already know how grateful I am to be here. They've taken great care. I think it's a great organization for vets, although I feel young and fresh like a young player as well. I feel like I've got a lot of ball left and I would like to finish it up with an organization like this.

"My two goals are still a Super Bowl and 100 sacks, and I have not accomplished either one of them. I haven't won a playoff game. I think we have the pedigree here to do all of that next season and I would love to be a part of it."

Dunlap's 87.5 regular-season sacks in his career are 12th among active players, according to Pro Football Reference. He made the Pro Bowl in 2015 and '16. The Bengals were 0-5 in the playoff during his time in Cincinnati.

The Seahawks recorded only nine sacks in six games before their trade for Dunlap, which coincided with strong safety Jamal Adams' return from a groin injury. Despite playing in only eight regular-season games, Dunlap was fourth on the team in sacks behind Adams (9.5), defensive tackle Jarran Reed (6.5) and defensive end Benson Mayowa (six).

The defensive ends who remain under contract with Seattle are L.J. Collier (three sacks in 2020), Rasheem Green (two), Alton Robinson (four) and Darrell Taylor, a second-round pick last year who did not play as a rookie because of a leg injury from college.

Dunnlap joins Mayowa, Bruce Irvin, Damontre Moore and Jonathan Bullard as free agents. Branden Jackson is also a free agent but he is not expected to play again because of a neck injury.