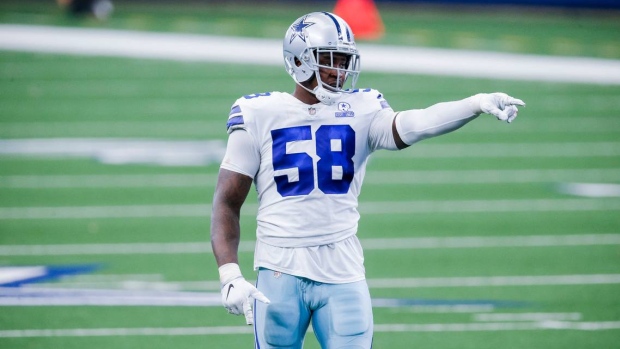 Aldon Smith is returning to the NFC West.

NFL Network's Mike Garafolo and Ian Rapoport report the defensive end is signing a one-year deal with the Seattle Seahawks.

Another one: The #Seahawks and Aldon Smith have agreed to terms on a one-year deal, sources tell me and @RapSheet.

Smith, 31, made his return to the NFL last season after a four-year suspension with the Dallas Cowboys.

In 16 games in 2020, Smith recorded 48 tackles, 14 quarterback hits, 5.0 sacks and recovered two fumbles including one for a touchdown.

A native of Kansas City, Smith was the seventh overall selection of the 2011 NFL Draft out of Mizzou by the San Francisco 49ers and was an All-Pro in his second season in 2012.

After three seasons with the Niners, Smith was released in the summer of 2015 following a third DUI arrest. He joined the Oakland Raiders, but was suspended for one year after Week 9 of the 2015 season due to a hit-and-run case the previous August.

Multiple attempts at reinstatement were rejected by the league and following a 2018 domestic violence arrest, Smith was released by the Raiders.

He was finally reinstated in May of 2020 to join the Cowboys' virtual workouts.