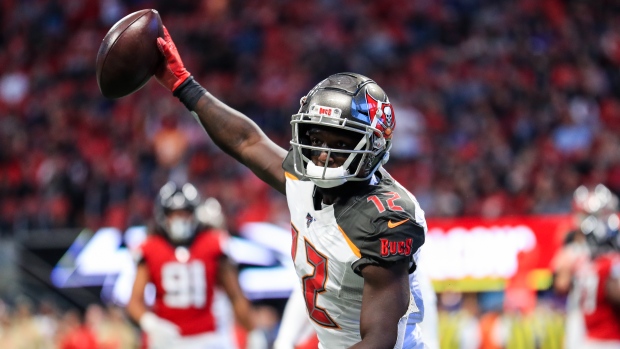 Tampa Bay Buccaneers receiver Chris Godwin has officially been ruled out of Sunday's home opener against the Carolina Panthers, it was announced Saturday.

Godwin returned to practice Friday for the first time since entering the concussion protocol on Wednesday.

Godwin went through some light stretching and pass-catching on the sideline with the training staff during Friday's practice. Light exercise, football-specific exercise and even noncontact drills are all permissible within the NFL's five-step concussion protocol.

Godwin's status Friday was officially "doubtful" but there was a possibility he could have still played Sunday, depending on how he fared Saturday. But when tested Saturday, he was not cleared from the concussion protocol.

The Bucs have had to deal with injuries to both of their Pro Bowl wideouts. Mike Evans missed all but one practice last week and played on a strained hamstring against the Saints, and he was limited in practice this week.

Godwin led the Bucs with 79 receiving yards against New Orleans last Sunday, but took a fourth-quarter hit to the helmet by D.J. Swearinger that drew an unnecessary roughness penalty.

In his breakout year last season, Godwin recorded 1,333 receiving yards -- third most in the NFL -- despite missing the final two games.

With Godwin out, Justin Watson and Scotty Miller are expected to get more looks. Miller caught six passes for 73 yards against New Orleans. The 6-foot-3 Watson caught one pass for 6 yards, but he could get opportunities to work the middle of the field because of his size.