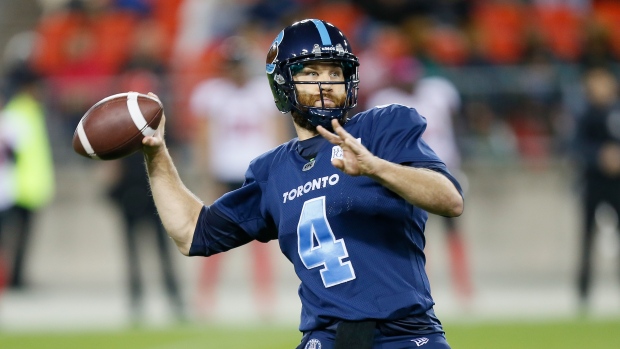 Toronto Argonauts quarterback McLeod Bethel-Thompson reportedly is opting out of his CFL contract.

"An intriguing veteran who can learn a system quickly, now has plenty of snaps," Rapoport tweeted.

The Argos said Monday there was nothing official regarding Bethel-Thompson opting out.

Bethel-Thompson, 32, spent the last three seasons with Toronto. The San Francisco native threw for 4,024 yards with a CFL-high 26 TD strikes in 2019. He was also the Argos' backup to veteran Ricky Ray for the club's 2017 Grey Cup victory over the Calgary Stampeders.

The Winnipeg Blue Bombers added Bethel-Thompson to their practice roster in September 2016 but he was released the following month.

Prior to heading to the CFL, Bethel-Thompson spent time in the NFL with the San Francisco 49ers, Miami Dolphins, Minnesota Vikings, New England Patriots and Philadelphia Eagles. But he has not appeared in a regular-season game.

The CFL cancelled the 2020 season last week due to the COVID-19 pandemic. The CFL Players' Association said players in the final year of their deals could be released immediately if they wished to pursue NFL opportunities.

Calgary linebacker Nate Holley, the CFL's top rookie last season, exercised that right Wednesday. He has since signed with the NFL's Miami Dolphins.