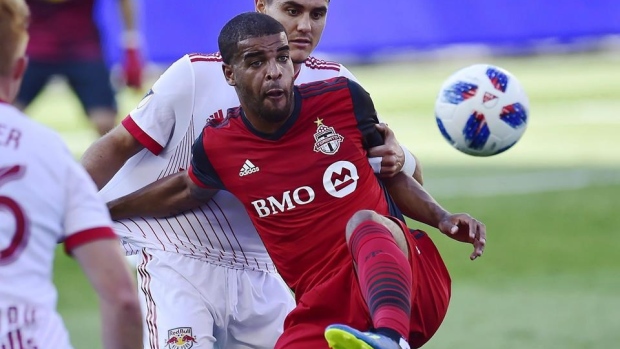 In dealing Hamilton, Toronto is giving up on a homegrown player who at 23 was in his sixth season with the first team.

But the Toronto native saw limited action behind Altidore and the now-departed Sebastian Giovinco. And he was inconsistent when he got his chances, showing flashes of his talent in front of goal.

Hamilton appeared in 53 regular-season games (28 starts) with 11 goals and three assists. He has won two caps for Canada.

He signed as a homegrown player in January 2014, spending time on loan that year with Portugal's CD Trofense.

Toronto declined his contract option last November but signed him to a new deal in January that pays him US$137,659 this season. For Hamilton, given the departure of Tosaint Ricketts and Lucas Janson, it was an opportunity to establish himself as first choice behind Altidore.

"I think this is really an important year for Jordan," Toronto coach Greg Vanney said at the time. "He has to take another step forward."

On Tuesday, with the summer transfer window open, Vanney acknowledged that the strikers behind Altidore will have to "step up and show that they are capable of carrying a load and putting things in the back of the net."

"We've got to get them service. That's where these wide guys can come into play," Vanney added. "But I think we need to either find that within or we need to find that without ... who else aside from Jozy in that position can score goals."

Toronto has opted to play Spanish playmaker Alejandro Pozuelo up front while awaiting the return of Altidore from Gold Cup duty.

Altidore (five goals in nine games) and Pozuelo (seven goals in 16 games) have carried most of the goal-scoring load with Nick DeLeon chipping in with four in 19 games.

Terrence Boyd is scoreless in 11 games this season while fellow forward Ayo Akinola has one goal in eight games.

A two-time winner of the MAC Hermann Trophy award winner as the top men's NCAA soccer player, Mullins scored 47 goals and added 35 assists in 92 career matches at Maryland. He went to New England 11th overall in the 2014 MLS SuperDraft.

Mullins has 24 goals and 10 assists in 115 regular-season MLS games (57 starts). This season he has no points in nine games (two starts).

He was acquired by Columbus in July 2018 in a trade with D.C. United in exchange for $150,000 in targeted allocation money.

Mullins is making $260,004 this season, according to the MLS Players' Association.