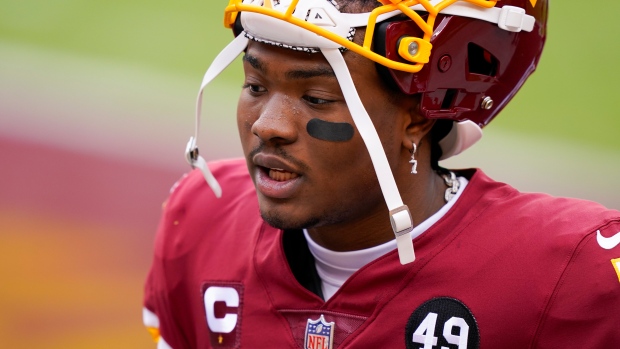 Washington released quarterback Dwayne Haskins on Monday, hours after coach Ron Rivera said either Alex Smith or Taylor Heinicke will start the regular-season finale with the NFC East at stake.

Rivera is “optimistic” Smith will be ready to play at the Philadelphia Eagles after missing the past two games with a strained right calf. Haskins started those two games, both losses, is 1-5 this season and turned the ball over three times in a 20-13 defeat to Carolina on Sunday that saw him benched for Heinicke.

Rivera said he saw more out of Heinicke — who hadn't played in the NFL since 2018 — after replacing Haskins in the fourth quarter of that game. Haskins was 14 of 28 with two interceptions and a fumble, while Heinicke led a touchdown drive late against the Panthers, who were playing safe with a big lead.

Haskins was fined $40,000 and stripped of his captaincy last week after violating COVID-19 protocols for partying mask-less with several people after a loss to Seattle. It was his second protocol violation this season, and his performance against Carolina ended his time in Washington.

The team is 4-1 with Smith as the starter this season. Rivera said his offence is more successful with the 36-year-old under centre because he manages the game better and doesn't commit mistakes typical of younger players.

After blowing its first chance to win the division by losing to Carolina, Washington (6-9) just needs to beat the Eagles to get into the playoffs and host a wild-card round game. The game was moved to primetime Sunday.

“We're playing with house money and that's the best part of it,” Rivera said. “No one expected us to be here.”

Washington remains a second-half team, holding Carolina without points and scoring 10 to continue a season-long trend. It didn't add up to a comeback this time, but the offence and defence have improved after halftime for a while now.

“When we come out in the second half and you're already warm in the game, you're feeling good, but you got to do that the first play of the game,” defensive end Chase Young said. "I feel like that’s the only way.”

Washington's way has been starting slow in every facet of the game. Against Carolina, receiver Cam Sims said the defence did some things players weren't used to, and the defence took forever to warm up.

A team with eyes on the playoffs won't last long — if it gets there — playing like this in the first half.

"We can’t wait until the second half to start fast, and that’s something we just know," Young said. "It’s something that we’ve been working on and we just got to get better at it.”

Young is already the youngest player in franchise history to be picked for the Pro Bowl and at 21 is the team's newest captain after replacing Haskins. His stock keeps rising, though, after forcing a fumble on a sack of Teddy Bridgewater and pumping up Heinicke when he entered the game.

The Haskins era is done in Washington, and it's unclear what's next for the Ohio State product. The 15th overall pick in 2019 is now in worse shape than Josh Rosen after Arizona moved on, given his protocol violations and lack of production.

All eyes are on Smith's right calf — which is the same leg he broke the tibia and fibula two years ago, requiring 17 surgeries and a titanium rod to be inserted. But there's also top receiver Terry McLaurin's nagging ankle injury that forced him out against Carolina.

Get Heinicke ready just in case Smith can't play. This would be just his second career start.