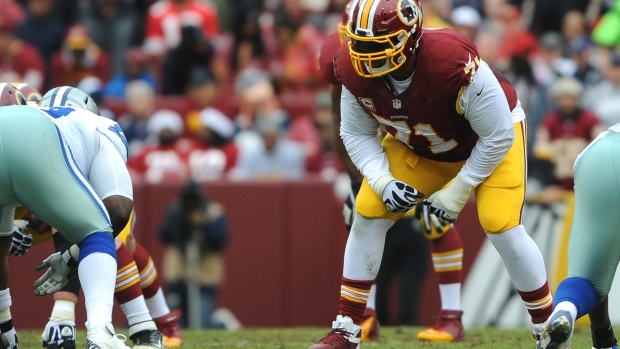 It appears the New England Patriots may have not have offered a first-round pick for Trent Williams after all.

Multiple reports surfaced Thursday stating the Patriots offered their 2020 first-round pick to Washington for holding out left tackle, but were told it would take more to complete a trade.

NFL Network's Ian Rapoport, however, has since refuted those reports and had says he was told it was “unequivocally not true.”

From what I understand, this is false. “Unequivocally not true” was the precise wording. So, carry on https://t.co/2S91yATSPX

ESPN's Adam Schefter reported earlier this month that teams had contacted Washington about potentially trading for Williams but the club had shut down all inquiries.

Williams, who has been with the organization since being drafted out of Oklahoma No. 4 in 2010, reportedly no longer wants to play for Washington due to the way the team handled an off-season medical condition.

"Since day one of camp you notice his absence is impacting us tremendously. You go from not having to worry about the blind-side at all, to having to chip on that side, add a tight end there which changes what you do," Peterson said last week.

"I think it it's making [rookie] Dwayne Haskins have to think more, not process things as calmly. Matter of fact, I think it's impacting all of our quarterbacks. Guys are coming off the edge in practice right there on the quarterback and the running back. It's been a struggle."

The veteran of nine NFL seasons has made seven Pro Bowls.