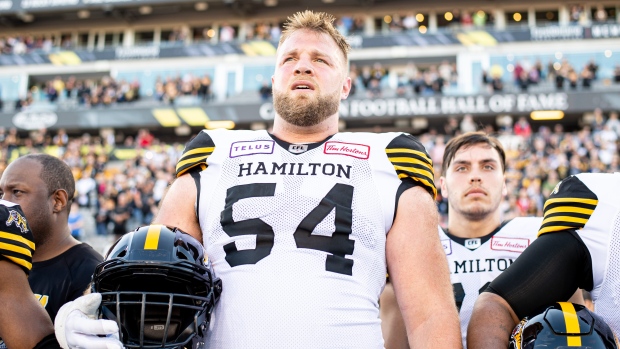 Hamilton will face the Winnipeg Blue Bombers in the Grey Cup on Sunday in Calgary. It will be Van Zeyl's third trip to the CFL final and he plans to be in his teammates' ears all week about not getting swept up in all the pre-game hoopla, and maintaining focus on turning a record-setting season into a special one by winning a championship.

"I don't care who's listening I'm going to tell every guy all week," Van Zeyl said following Hamilton's 36-16 East Division final home win over the Edmonton Eskimos. "(Grey Cup week) is going to be a marathon week . . . for guys new the league or who haven't experienced Grey Cup week, there are distractions everywhere.

"The team that stays focused the best is the team that usually wins the Grey Cup. If we can lock in for one more week and treat it like it's going to be our last week together as a family and team, I'm pretty confident in our ability to win the game."

Winnipeg advanced to the Grey Cup with a 20-13 road win over the Saskatchewan Roughriders in the West Division final Sunday.

Hamilton swept the season series with Winnipeg 2-0 en route to a club-record 15-3 regular-season mark. And although the Bombers finished third in the West Division, they posted an 11-7 record before registering road playoff wins over defending-champion Calgary and Saskatchewan.

Both Hamilton and Winnipeg head to Calgary sporting lengthy Grey Cup droughts. The Bombers haven't won since 1990 while the Ticats' last title came in '99.

So after 11 seasons with Toronto — and after signing a three-year contract extension in 2017 — Van Zeyl was unemployed. But hours after his release, Hamilton signed the 36-year-old native of Fonthill, Ont., to a two-year deal.

It's been a seamless transition for Van Zeyl, who immediately stepped into Hamilton's starting lineup at his usual right tackle spot. Despite losing incumbent quarterback Jeremiah Masoli to a season-ending knee injury, the Ticats didn't skip a beat under backup Dane Evans, leading the CFL in offensive points scored (28.2 per game), touchdowns (57), net offence (395.8 yards per game), average yards per play (6.84) and passing yards (313.3).

"There was no weight of expectation put on me," said Van Zeyl, whose first CFL start came against Hamilton in 2009. "This team embraced me and let me do what I had to do.

"I can't speak highly enough about the quality of people in this locker room and leading this team in terms of coaches and front office and what they've done for me and this organization."

A two-time CFL all-star, Van Zeyl is a finalist for the league's top lineman award for the first time. Winnipeg tackle Stanley Bryant, who's taken home the honour the past two seasons, is the West Division nominee.

"I've never really been one for personal accolades," Van Zeyl said. "To be honest, it would mean a lot but if we don't win the Grey Cup it will be all for nothing.

"I'm going to give that one night, and really that's all it is — one night — everything but I want to make sure I put my best foot forward so when we're in the Grey Cup my teammates know they can count on me."

Van Zeyl's off-season conditioning includes playing hockey two or three times weekly. Van Zeyl usually lines up on defence and certainly would be an imposing figure to any puck carrier coming up the ice.

"I try to stay fast and keep the quick twitch, stay lean so I'm not one of the bigger offensive linemen and carry weight well," Van Zeyl said. "I try to stay back so I'm not in the way as much but I like the defensive side, playing angles and keeping my feet moving."

Many offensive linemen over 35 would take their career one season at a time. But Van Zeyl, who was a defensive lineman during his collegiate career at McMaster, believes he still has plenty of quality football left.

"I still feel like I'm playing pretty dominant football and I'm going to play until I'm not having fun anymore," he said. "Honestly, this has been a heck of a fun year for me.

"But that's a credit to the guys around me and the coaches and preparation that goes into every game. It's fun to come to work every day, it's fun to play with these guys and I look forward to many more years with this team."