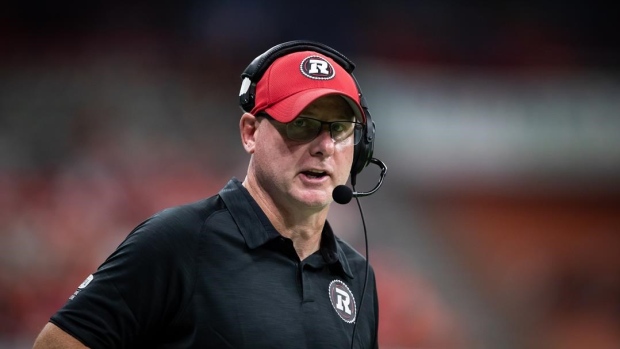 OTTAWA — No one can blame the Ottawa Redblacks for not wanting to look in the rear-view mirror.

There's nothing pretty back there.

Ottawa (1-4-0) sits dead last in the CFL and at the bottom of nearly every statistical category entering a game Wednesday night against the visiting Hamilton Tiger-Cats (3-3-0), who are first in the Eastern Conference.

Ottawa head coach Paul LaPolice knows his team has to take a simple approach to turn things around.

"Yes, it’s an East opponent, which you would call a four-point game, but we really haven’t talked about that this week we’ve just talked about going out and getting a win."

Ottawa could be catching Hamilton at the right time. The Ticats will be starting third string quarterback David Watford for the second straight game as both Dane Evans (lower-body) and Jeremiah Masoli (ribs) remain sidelined. Masoli will serve as backup for the game.

Hamilton will be playing their second game in five days, while the Redblacks are coming off a bye week, and the Tiger-Cats will be without receiver Brandon Banks for the third straight game.

Despite the quick turnaround and the injuries to his club, Hamilton coach Orlondo Steinauer has been impressed with his team's outlook.

"I'm really proud of the growth of the football team. The mindset, the stuff that doesn't go on air or that, just how they've kind of bonded," he said.

"They're starting to take ownership amongst themselves, be less reliant upon the coaches. We're finding out who our self-starters are, that sort of thing. But I won't be satisfied until the confetti falls on us, that's always the goal and that's the goal of every team."

Once again the Redblacks will look to Dominique Davis to lead the charge with veteran Matt Nichols serving as the backup.

Davis made his first full start Sept. 11 in a 45-13 loss to the B.C. Lions that was not overly flattering, and the 32-year-old knows he needs to be better.

"Our opponents get paid to make plays too and sometimes the defence is going to make a better play than us. That’s just the name of the game. It’s just part of football, of course I want to cut down the bad decisions, but it’s not like I’m the only quarterback in this league making bad decisions."

Davis is far from the only one to blame for the Redblacks' predicament. Through seven quarters of action, Davis has been sacked six times.

Ottawa’s running game has lots of room for improvement as it has averaged a league-low 71 rushing yards per game. Things have been just as ugly defensively; Ottawa has given up the most points in the league (155).

Despite the Redblacks struggles, the Tiger-Cats know they can ill afford to take them lightly.

"No one is overlooking anyone . . . they're a dangerous offence," said Hamilton’s Dylan Wynne. "They're coming off a bye week, they're getting key components back into the game. We're fully expecting them to play the best game they've played all year versus us because that's traditionally what happens. We're excited for another opportunity to try to play the best Ticat football we can."

LET’S GIVE THANKS: Redblacks all-star receiver and fan favourite, Brad Sinopoli, who retired earlier this year will be honoured during Wednesday night’s game.

DUCK, DUCK, HODGE: Fans will need to wait awhile before they see former NFL QB Devlin Hodges in action as he needs to complete his quarantine and familiarize himself with Ottawa’s playbook.

WHO NEEDS REST?: Simon Lawrence isn’t giving his team any excuses despite a short layoff between games. “We knew that was on the schedule. It is what it is. It’s perfect.”

— With files from Dan Ralph.

This report by The Canadian Press was first published Sept 21, 2021.