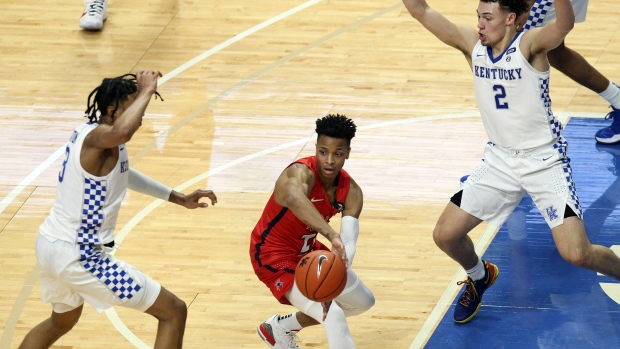 LEXINGTON, Ky. -- Blake Francis and Nathan Cayo powered Richmond to the program's first road victory over an Associated Press top-10 team, rallying in the second half to beat No. 10 Kentucky 76-64 Sunday.

The Spiders (2-0) had been 0-25 against top 10 teams and trailed 36-30 just after halftime. Francis and Cayo each finished with 18 points, many coming during a series of small scoring runs that pushed Richmond ahead.

A 9-0 burst gave the Spiders the lead, and a 7-0 stretch made it 58-46 with 7:43 remaining. In between, Francis and Tyler Burton hit 3-pointers and Cayo converted a three-point play.

Kentucky (1-1) got within eight before Richmond answered with Jacob Gilyard's fast-break layup and Matt Grace's 3-pointer for a 13-point edge with 4:40 left. Francis added a 3-pointer that made it 72-56 and sparked a celebration on the Spiders' bench.

Grant Golden made two free throws for Richmond with 10 seconds left before Burton grabbed Kentucky's final miss to seal it.

Richmond shot 59% from the field after halftime and held the Wildcats to just 31%. It was the Spiders' first victory over a ranked team on the road since topping No. 14 Virginia Commonwealth 64-55 on Jan. 31, 2015. The Spiders improved to 14-22 against top-25 opponents.

B.J. Boston Jr. had 20 points and Olivier Sarr 17 for Kentucky, which outrebounded Richmond 54-31 but shot 36% and all missed all 10 tries from behind the arc.

Of the six Wildcats that played at least 10 minutes, five were freshman, including four in the starting lineup.

Kentucky will likely fall out of the top 10 with the loss. Richmond might gain a few toward getting in the rankings with a huge win.

Richmond's biggest deficit was just six points, close enough to claw back in what was a back-and-forth contest for 26 minutes.

Kentucky shot well in the first half but cooled considerably after that and looked out of sync for much of the second half.

Kentucky faces No. 6 Kansas on Tuesday night at the Champions Classic in Indianapolis. The Wildcats are 2-3 recently against the Jayhawks, including a 71-63 home victory in January 2019.