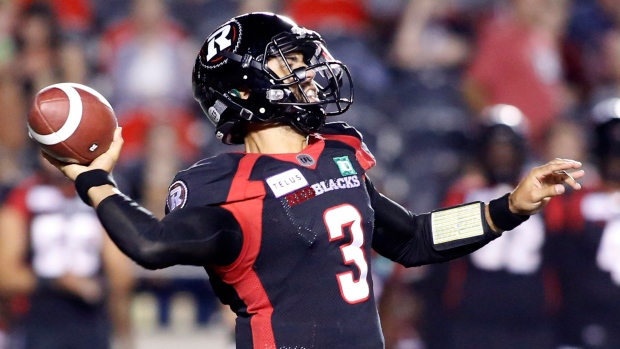 The Ottawa Redblacks, who have lost their last six games, could be headed for another change at the quarterback position.

Redblacks head coach Rick Campbell told TSN Radio Ottawa 1200 on Monday that the team will be game-planning for the upcoming week and discussing roster personal changes on Monday, and will subsequently announce a starting quarterback for Saturday’s game against the Edmonton Eskimos on Tuesday.

Campbell: Will decide on a starting QB tomorrow

Redblacks Head Coach Rick Campbell shares his thoughts on the loss, struggles of the offense, Will Arndt and familiar faces returning to town with the Eskimos.

“We’re going to do whatever we can to win as many games as we can this year, but we’re going to sit down and talk [on Monday],” Campbell said. “. . . We’re in the mode of prepping for the practice week and making personnel decisions.

“We’ll definitely announce [the starting quarterback] tomorrow, and you’ll see who’s practising tomorrow and we’ll go from there. But as an overall football team, we’re not going to turn this into an experiment. We want to try to win as many games as we can.”

Rookie quarterback Will Arndt was brought in to replace starter Jonathon Jennings in the second of the team’s 40-7 loss to the BC Lions on Saturday. Jennings went 8-for-17 for 121 yards passing with an interception and Arndt finished 6-for-11 for 61 yards while also throwing an interception. Jennings, a fifth-year veteran, took over the starting job from Dominique Davis ahead of Week 13.

The Redblacks, who have a 3-10 record overall, are currently in a tie for the second worst record in the CFL.