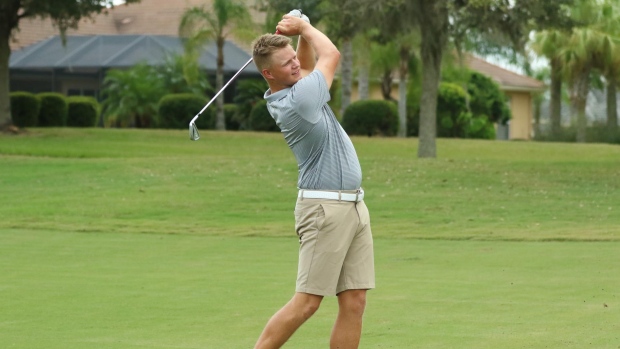 CARDIGAN, Prince Edward Island—Toronto’s Riley Goss got off to a fast start in the first round of the 54-hole Brudenell River Classic, shooting an 8-under round of 64, good for a one-shot lead over Baptiste Mory and Anthony Brodeur.

Starting on the back nine, Goss recorded five birdies over the first eight holes, going out in 31. He circled three more numbers on his back nine and did not record a single 5 the entire day. Three golfers are tied for third, two shots behind Goss.

“I didn’t really get into any trouble,” said Goss. “Maybe one tee shot was astray, and I had a window to get out onto the green, so I would say the key were my tee shots and some solid putting. I never really had a difficult putt coming back to the hole if I two-putted.”

Quebec City’s Mory took advantage of the par 5s at Brudenell River Golf Course, reaching all six in two shots. His bogey-free round featured seven birdies, including five on the front.

“I stuck to my plan,” said Mory. “When I wanted to hit driver, I hit driver. When it was time to hit an iron off the tee, I did that. The greens are pretty tough, so I tried to hit it at the right spots.”

Brodeur, of Oshawa, Ontario, had two eagles in his round and went 5-under over his last six holes to move into a second-place tie with Mory.

Two Vancouver golfers, Evan Holmes and Stephen Thomas, sit in a three-way tie for fourth, at 6-under, along with Craig Stefureak of Caledonia, Ontario.

“I think it was great to get off to a good start,” added Thomas in reference to this week’s 54-hole sprint. “I knew there were going to be a lot of birdies out there. There are six par-5s. You just have to make putts and birdie the holes you need to birdie.”

The shot of the day belonged to Fredericton’s Calvin Ross. Starting on the par-3 10th hole, he drained his first shot of the day for a hole-in-one—the first on the Mackenzie Tour – PGA TOUR Canada this summer. He went even-par the rest of the day, finishing with a 2-under 70.

“I was between a 9-(iron) and a pitching wedge,” said Ross who had never made an ace in tournament play before Tuesday. “I decided to go with a 9-iron, got it right on, it landed just right of the hole, kind of trickled to the left and dropped in. Obviously, I was super happy with the start.”

Seven players are tied for seventh place, at 5-under, including Golf Canada Amateur Team member Noah Steele, who is playing in his first event since winning the Osprey Valley Open.