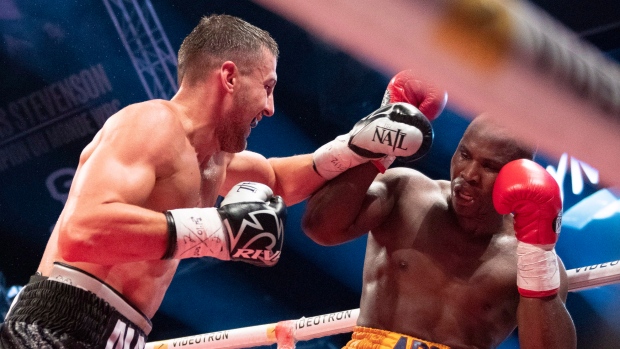 Montreal boxer David Lemieux knows there is a potential for serious physical harm every time he steps in the ring, but like most fighters he prefers not to think about it.

"In fact, I never think of it," the former IBF middleweight champion said Tuesday in a telephone interview. "These are definitely things that you don't want to happen, so you prepare yourself accordingly. One punch too many could mean the end."

A Saturday evening bout that left fellow Montreal boxer Adonis Stevenson in an induced coma has made it impossible to ignore the dangers of the sport. Stevenson has been in a Quebec City hospital since suffering a knockout loss to Oleksandr Gvozdyk of Ukraine in his WBC light heavyweight title defence.

"It is a very sad event," Lemieux said. "However these are things that can occur in a contact sport or an extreme sport. It is part of sports, unfortunately."

The hospital has not issued any update on Stevenson's condition since Monday afternoon, when it said he was stable and in an induced coma.

The incident has caused some to call into question the continued existence of boxing, but Lemieux said it is important to take a step back.

"What happened on the weekend can easily influence people's opinion," he said. "As for me, I think there is more contact, more concussions in hockey, for example, than in boxing."

He noted that boxers undergo close monitoring before receiving permission to fight.

"We undergo several medical exams. It isn't easy to get a permit to box," he said.

Lemieux said serious injuries are rare, and it is not realistic to consider banning boxing because of what happened to Stevenson.

"It is a very sensitive case. I know him personally," Lemieux said of Stevenson. "No athlete deserves that. I hope he comes out of this with as few after-effects on his brain as possible."

Tuesday afternoon Gvozdyk used Instagram to offer a few words of encouragement to Stevenson. "Adonis, you are a really strong man, and keep strong," he said in a short video. "I wish you recover faster. I know you'll pass through it."

"Adonis is a fighter and he will continue to fight this like a champion," she wrote on Twitter. "And I will do everything I can to make sure I support him and help (him) recover as quickly as possible to be back with our family! Thank-you for keeping him in your prayers."