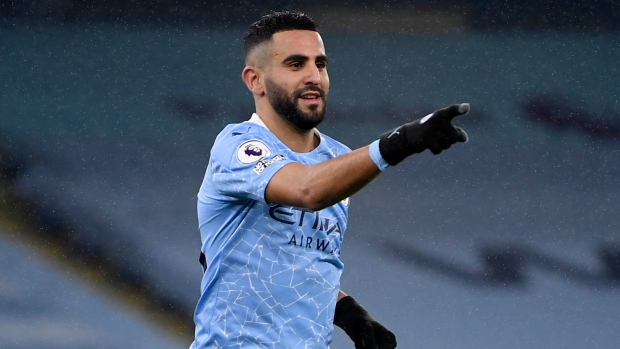 MANCHESTER, England — Riyad Mahrez netted a hat trick as Manchester City regained its scoring touch on Saturday by thrashing Burnley 5-0 at home for the third straight season in the English Premier League.

Benjamin Mendy and Ferran Torres also scored as City racked up more goals than it had in the team's three previous league games at Etihad Stadium this season.

Mahrez cut in from the right to score twice in the opening 22 minutes, and Kevin De Bruyne crossed for Mendy to volley in the third goal in the 41st.

Torres slotted in from close range in the 66th for his first Premier League goal before Mahrez completed his first hat trick for City, heading in a cross from substitute Phil Foden three minutes later.

De Bruyne later struck the post with a fierce effort and Gabriel Jesus had a goal ruled out by VAR for offside.

It was only City's fourth win in nine league matches, a poor return for a supposed title contender. A total of 10 goals from its first eight games was also disappointing for City, which might be turning the corner ahead of upcoming home matches against three of the weakest teams in the league — Fulham, West Bromwich Albion and Newcastle.