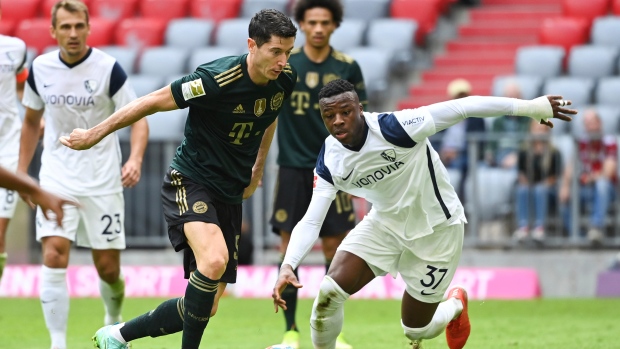 BERLIN (AP) — Robert Lewandowski scored yet again in Bayern Munich’s 7-0 rout of promoted Bochum in the Bundesliga on Saturday.

Lewandowski stretched his scoring run to 19 consecutive games across all competitions for Bayern. The Poland star’s second half goal also ensured he became the first Bundesliga player to score in 13 consecutive home games.

Bayern was already confident after starting the Champions League on Tuesday beating Barcelona 3-0, while Bochum arrived in Munich after two league defeats.

The visitors made a solid start until Leroy Sané opened the scoring with a brilliant free kick in the 17th minute. It was Bayern’s first shot on target.

Sané set up Joshua Kimmich in the 27th and Serge Gnabry picked the far corner for Bayern’s third in the 32nd.

An own goal from Vasilios Lampropoulos completed a first half to forget for Bochum – though history showed an improbable comeback was possible.

The clubs also met in the Bundesliga 45 years ago to the day, when Bochum – then playing at home – was four goals up against Bayern at halftime. Bayern fought back in the second half to win 6-5 with future club president Uli Hoeneß scoring the winner in the 89th.

Lewandowski has his own history to write, however. The Poland striker made it 5-0 in the 61st to extend his club-record scoring run. He has scored in every game since Feb. 15.

Kimmich got his second goal four minutes later and substitute Eric Maxim Choupo-Moting made it 7-0 in the 79th.

It could have been worse for Bochum. Thomas Müller thought he made it 8-0 but his goal was ruled out through VAR for offside.

Mainz drew with Freiburg 0-0 and it also ended scoreless between Arminia Bielefeld and Hoffenheim.

Leipzig was playing in Cologne late.