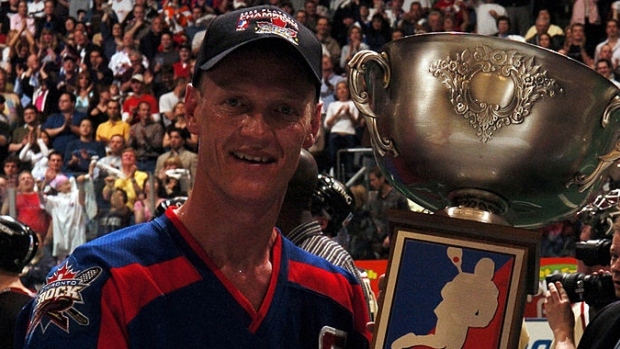 The Toronto Rock announced Friday that the team will retire the No. 32 worn by former captain and NLL Hall-of-Famer Jim Veltman prior to a game on April 12 against the New England Black Wolves.

Veltman will join Bob Watson's No. 29 and Colin Doyle's No. 7 as the only other retired numbers in franchise history.

Second, and most importantly, this.

“When I bought the team in 2010, it was really Whipper’s (Bob Watson) time and it was his moment to be honoured,” said Rock president and general manager Jamie Dawick in a news release. “After we won in 2011 and Bob retired, the focus really shifted to Colin and honouring him and it was his moment.  I didn’t want to take anything away from those two players and what they deserved.  Here we are today and the timing is just right.  There was never any doubt that Jim deserved this honour and I couldn’t be more thrilled to celebrate this team’s first captain and raise his jersey to the rafters where it belongs.”

Veltman said he is honoured by the gesture.

“When the phone goes off and I saw Jamie’s name and number I wondered what it was about,” said Veltman in the same release. “Jamie explained what the call was about, and I just thought wow, this is really cool, really thrilling. It’s been a few years for sure but it’s not about apologizing, this is great news and such an honour for me and my family. To be one of those names up in the rafters, it’s an honour and a thrill.

“I immediately start to think about all the moments and the great times and teammates. The memories that you carry with you, the moments that actually happened and that you lived through those moments. You feel it in your veins, the high pressure, intense moments and the big games. To be a part of that with a group of guys along with the coaches and management and ownership and the passionate fans, was all so special. If I could give the experience I had to everybody, I would.”

Veltman retired from the NLL in 2008 and owns the franchise record for most loose ball pickups at 1,958. He was named NLL MVP in 2004.