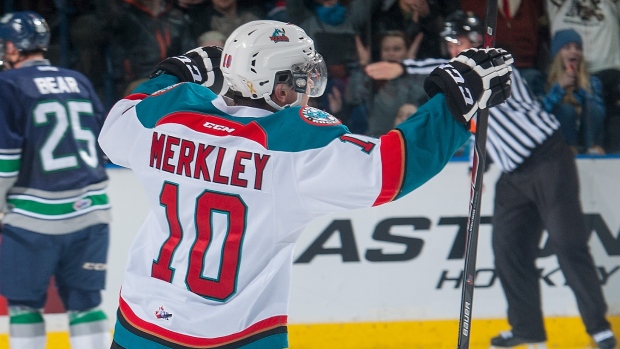 BRANDON, Man. - Nick Merkley's short-handed goal midway through the third period was the eventual winner as the Kelowna Rockets held on for a 5-3 victory over the Brandon Wheat Kings on Saturday in Game 2 of the Western Hockey League final.

Kelowna now leads the series 2-0 and will host Game 3 on Wednesday.

It was Merkley's second goal of the game, after scoring at 19:57 of the first period to give the Rockets a lead heading into the intermission.

Peter Quenneville scored twice in the third period for Brandon — including once on the power play. Tim McGauley added the other.

Kelowna's Jackson Whistle turned away 38 shots for the win in goal while Jordan Papirny kicked out 26-of-30 shots in 59:01 for the Wheat Kings.

The Rockets didn't have any power-play opportunities in the game, while Brandon went 1 for 4.