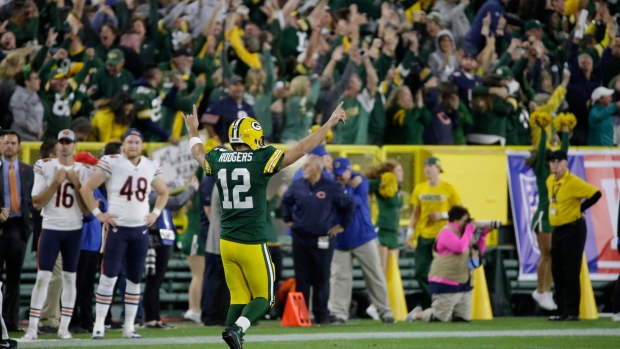 GREEN BAY, Wis. — Aaron Rodgers heard the applause after walking out of the stadium tunnel and back on to the field.

The team doctor had checked out his left knee after the Green Bay Packers quarterback was carted off the field in the second quarter. Rodgers, it seemed, had avoided a major injury.

He was good to go. The adrenaline kicked in.

"When I got the ovation, at that point, I said, 'We might as well win this thing,'" Rodgers recounted.

The hobbling two-time NFL MVP threw three touchdown passes in the second half after returning from injury, and the Green Bay Packers overcame a 20-point deficit for a thrilling 24-23 win over the Chicago Bears on Sunday night.

Rodgers connected with receiver Randall Cobb for a catch-and-run through the secondary for a 75-yard touchdown and the go-ahead score with 2:13 left in the game.

"Aaron Rodgers was remarkable. I just can't tell you how proud I am with him," coach Mike McCarthy said.

Nick Perry sacked the Bears' Mitchell Trubisky on fourth-and-10 with 58 seconds to complete the comeback.

Against the archrival Bears. To start the Packers' 100th season.

Sunday marked the first time in franchise history that the Packers won after trailing by 17-plus points entering the fourth quarter, according to the Elias Sports Bureau.

The Packers posted the second-largest comeback in franchise history at Lambeau Field, behind only a rally from 21 points down to beat New Orleans on Sept. 17, 1989.

For Rodgers, this was special.

"This will definitely go down as one my favourite memories, especially in this rivalry," Rodgers said.

And especially because how awful the Packers played in the first half.

A Chicago defence featuring newly acquired star linebacker Khalil Mack dominated until the third quarter. Mack had a 27-yard interception return for a touchdown against backup quarterback DeShone Kizer in the second quarter.

A gimpy Rodgers returned in the second half and finally figured out the Bears. He also found Davante Adams and Geronimo Allison for touchdown passes.

"Obviously, that's a tough one for us. It stings," coach Matt Nagy said after his Bears debut.

It was Rodgers' first regular-season home game since Sept. 28 against the Bears. He was limited to seven games in 2017 because of a collarbone injury.

Mack nearly stole the show. He also stripped the ball for a turnover in the red zone off Kizer in the second quarter. Mack made an immediate impact in his first game since the Bears acquired the premier pass rusher in a blockbuster deal with the Oakland Raiders.

The Bears led 20-0 at one point and their defence dominated until the second half.

Then Rodgers returned, and the Packers' defence held the Bears in check.

"I prepared all off-season for the first game of the season and I wanted to ... make an impact," Mack said. "But you want to win these games. That's the only thing on my mind. I hate losing."

Rodgers was hurt in the second quarter after slipping to the turf while under pressure from linebacker Khalil Mack and defensive lineman Roy Robertson-Harris. The lineman landed on Rodgers.

The quarterback initially tried to get up, then went back down, and was attended to by trainers. He appeared to reach down for the back of his left leg. Rodgers then walked to the cart that took him up the Lambeau Field tunnel.

Rodgers had ACL surgery on his left knee while in college.

McCarthy said he was prepared to go with Kizer to start the second half until getting the word from the team doctor in the tunnel.

"His performance speaks for itself," McCarthy said.

With limited mobility, Rodgers operated a no-huddle offence in the second half that kept him in the pocket.

His right arm was just fine.

"It was going to have to take something really catastrophic injury-wise to keep me off the field in the second half," Rodgers said.

The Packers plan to run more tests on their QB on Monday, though Rodgers seems to think his availability for next week's game against Minnesota is a foregone conclusion.

An offensive-minded coach, Nagy had the aggressive Bears' offence pushing the Packers around the field in the first half.

Mitchell Trubisky was 23 of 35 for 171 yards. He also ran for 32 yards on seven carries, including a 2-yard touchdown run in the first quarter.

It turned out to be the only offensive touchdown the Bears would score all night.

The Packers' defence, in new co-ordinator Mike Pettine's first game, held the Bears to two field goals in the second half.

"You know we talked about finishing and we didn't do that," Nagy said.

There were no apparent signs of protest during the national anthem, when Bears players and coaches locked arms on the sideline.