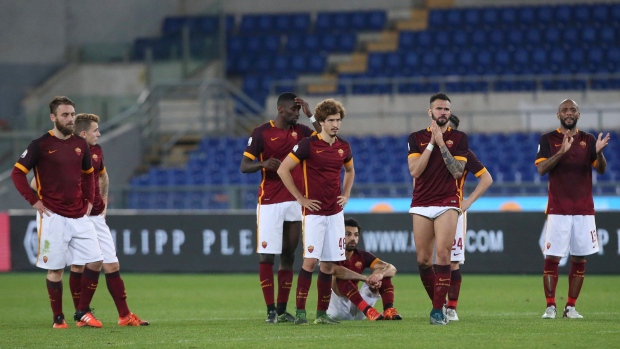 A dejected Roma , The Canadian Press

MILAN - Roma's miserable month continued as it crashed out of the Italian Cup on Wednesday, losing 4-2 on penalties to second-division Spezia.

"On behalf of AS Roma and myself, I want to apologize to the fans for today's game," said Roma's American President James Pallotta on the club's twitter account. "Congratulations to Spezia."

Holder Juventus is safely through to the quarterfinals after sweeping aside 10-man Torino 4-0 in a derby match.

Napoli crushed Hellas Verona 3-0, while relegation-threatened Carpi pulled off an upset, with Antonio Di Gaudio scoring the only goal in a 1-0 victory at Fiorentina.

Both Carpi and Fiorentina hit the woodowrk in the first half, while they each had a player sent off in stoppages as Gonzalo Rodriguez and Jerry Mbakogu were dismissed for an off the ball scuffle.

Spezia scored all four of theirs to book a quarterfinal tie against third-division giantkiller Alessandria, which has knocked out Palermo and Genoa.

Roma, which is through to the knockout stages of the Champions League, has not won in any competition since beating Lazio in the capital derby on Nov. 8, leaving coach Rudi Garcia under pressure.

The team was resoundly jeered at the end of each period, while there were several chants against Garcia.

"Tonight we were expected to win and we didn't, it's a failure," Garcia said. "We have to weather the storm, recapture the wolf-like spirit, but I will never give up and I will push the team until the death, if that's what's needed.

"Now the only thing we need to do is not give up and get back to winning ways from Sunday against Genoa. We need character and pride. We are all angry at tonight's performance. You can't go out of the Italian Cup against a Serie B side. We need a different attitude on the pitch."

In Turin, Simone Zaza had given Juventus a first-half lead before Cristian Molinaro was sent off for a second yellow card, four minutes after the break.

Juventus will face either last year's runner-up Lazio or Udinese in the quarterfinals.

Omar El Kaddouri and Dries Mertens got Napoli off to the perfect start, giving the hosts a 2-0 lead inside 12 minutes. Verona hit the crossbar before substitute Jose Callejon added a third minutes after coming off the bench.

Napoli meets league leader Inter Milan in the final eight, while Carpi will face either Sampdoria or AC Milan in its first ever Italian Cup quarterfinal.