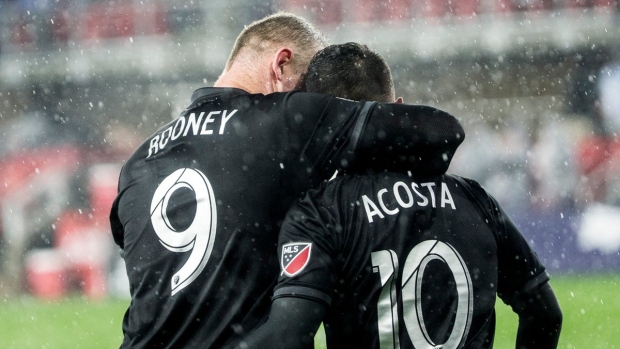 FOXBORO, Mass. — Wayne Rooney converted a penalty kick in the 90th minute to give D.C. United to a 1-1 tie with the New England Revolution on Saturday night.

D.C. United (7-4-4) took over sole possession of first place in the Eastern Conference.

Rooney scored after taking a hard hit from New England goalkeeper Matt Turner in the 56th minute. Turner was given a red card and Brad Knighton entered the game as a substitute. Knighton made a diving stop on Rooney's ensuing free kick over the wall from about 20 yards. He also got a hand on Rooney's penalty kick, but couldn't stop Rooney from picking up his eighth goal of the season.

Juan Agudelo's header for his third goal off a cross from Cristian Penilla gave the Revolution (3-8-4) the lead just a couple minutes after they began playing a man down. New England, which has allowed the most goals in the league, had its second straight draw since veteran coach Bruce Arena took over.