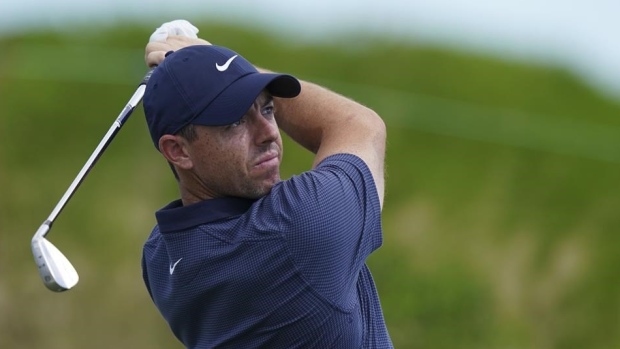 DUBAI, United Arab Emirates (AP) — Rory McIlroy moved within two shots of leader Justin Harding after the third round at the Dubai Desert Classic on Saturday as the Northern Irishman tries to win the event for the third time.

McIlroy shot a 3-under 69 to get to 10 under overall at the tournament he won in 2009 and 2015. He closed the gap on Harding, who maintained his halfway advantage with a 71 at Emirates Golf Club.

“It would be nice to get another win, especially here in Dubai,” the No. 8-ranked McIlroy said. “I’ve just got to go out there tomorrow and try to play a good round of golf and hopefully it’s good enough.”

On the back nine, McIlroy hit three superb second shots into par 5s that set up an eagle and two birdies. He had two other birdies on the front nine along with three bogeys on the day.

“It was a fair reflection how I played. Some good things in there and a couple bad things as well and I feel like it all evened out by the end and it was nice to birdie the last and shoot something in the 60s and play myself into the final group tomorrow,” the four-time major winner said.

Tommy Fleetwood (69) and Erik van Rooyen (71) are both three strokes off the lead, one shot clear of a group of six that includes Paul Casey (70) and Tyrrell Hatton (73).

Harding was disappointed not to add birdies on his final two holes. He finished with two birdies and a bogey.

“The greens are tough,” the South African said. “They are concrete but when you are chipping into them it’s difficult to chip them up close. You find yourself making 4- or 5-footers all day long."

“At the end of the day, I’ve just got to go out and keep doing what I’m doing, and make a couple birdies and shoot 70, 69, something like that, and make them shoot 5- or 6-under par, credit to them," he said.