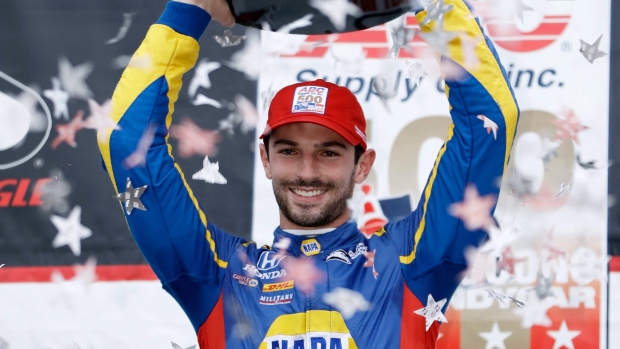 LONG POND, Pa. — Alexander Rossi was as worried as the rest of the IndyCar field when a violent wreck shot Robert Wickens' car airborne, ripped up the catchfence and left the tub of the rookie's Honda toppled on the asphalt.

The crash at Pocono Raceway was the latest grim reminder how drivers in open-wheel racing put their lives on the line.

"It's part of our job, right? You've got to compartmentalize," Rossi said. "You've got to accept it and deal with that emotion after the race."

Wickens was airlifted to a hospital and was being treated for injuries to his lower extremities, right arm and spine following an accident early in the race. IndyCar said the Canadian sustained a pulmonary contusion and will undergo an MRI and probable surgery at Lehigh Valley Hospital Cedar Crest in Allentown.

Once the race restarted after a two-hour stoppage to repair 80-feet of fence, Rossi got rolling.

Rossi dominated Sunday at Pocono and led 180 of 200 laps to win his second straight race and third of the season, slicing into Scott Dixon's grip on the championship lead with three races left in the season.

Dixon finished third and his points lead over Rossi dipped to just 29 points, as neither driver can afford much of a slip up in the title hunt.

"We've been a bit blah. They've been excelling," Dixon said

Rossi, the 2016 Indianapolis 500 champion, ended Will Power's bid to win three straight Pocono races. Power made a hard charge down the stretch and finished second to keep his bid for a second career IndyCar title in sight.

Rossi also won for Andretti Autosport on the streets of Long Beach in April and the Mid-Ohio road course three weeks ago.

But the championship race was tinged with worry over the 29-year-old Wickens, a driver on the rise in his first season with Schmidt Peterson Motorsports

Wickens was attempting to pass Ryan Hunter-Reay when the two cars slightly touched just six laps into the race. That caused Hunter-Reay's car to careen into the wall and Wickens' car was pulled along for the ride. Once Wickens' car soared over Hunter-Reay's and hit the fence, it spun round and round like a top. The fencing was shredded and Wickens' car reduced to just the tub, which came to a rest on the track along an interior wall.

Medical workers calmly attended to Wickens, and the Canadian was taken to an ambulance before he was transported to the helicopter. The impact of the wreck tore out about 80 feet of fence, damaged a few posts and stopped the race. After a nearly two-hour delay, the race resumed without another spate of aggressive driving — Graham Rahal tangled with Spencer Pigot as the field was brought to green — and ended without another caution.

For Rossi, his thoughts were with Wickens.

"It's tough to really celebrate after what happened," Rossi said.

Dixon echoed the thoughts of the rest of the paddock when he said IndyCar was a "close-knit family " and he was thinking of Wickens.

Bourdais, who finished fourth, raised concerns about the quality of the repairs and condition of the fence and did not want to get back in the car. Track President Ben May said: "It may not be the prettiest job but it's going to be safe."

It was one more chilling moment at Pocono. Justin Wilson died from a head injury in 2015 when a piece of debris from a crashed car bounced off the track and hit his helmet.

Hunter-Reay, James Hinchcliffe, Pietro Fittipaldi and Takuma Sato were among the drivers collected in Sunday's wreck. Hinchcliffe held his wrists as he slowly left the car but was cleared and released from the medical centre. Hinchcliffe went to the hospital to visit his Schmidt Peterson Motorsports teammate.

Hinchcliffe survived his own life-threatening injury when a broken part from his car pierced an artery during a 2015 crash at Indianapolis Motor Speedway. He's close with Wickens as the two raced each other as youngsters in Toronto. Hinchcliffe, runner-up on ABC's "Dancing With The Stars" in 2017, helped lure Wickens to IndyCar this season after a successful career in Europe.

Wickens had reeled off five straight top-five finishes and matched a career-best second in the last race at Mid-Ohio. He is sixth in the points race.

"We'll enjoy this one, but dark cloud (today)," Rossi said.

Other items of note at Pocono:

Team owner Roger Penske said it would be tough to field a fifth car for driver Tony Stewart in next year's Indianapolis 500.

Stewart, a three-time NASCAR champion and Indiana native, said last week he'd like another crack at the Indy 500 as long as he could drive a competitive car.

Penske, who has 17 Indianapolis 500 victories, has long wanted to run a car at the Brickyard with Stewart.

"Who knows what will take place over the next few years. It would be super to have him in one of our cars," Penske said. "But he knows running a race team, it's not easy just to put out a car. If we put a car out for Stewart, it's got to be the best in the field."