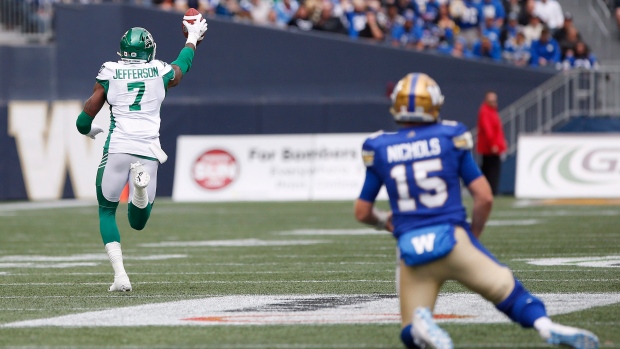 WINNIPEG — Even Saskatchewan Roughriders head coach Chris Jones had a hard time believing how his team's 32-27 victory over the Winnipeg Blue Bombers unfolded on Saturday.

The Roughriders scored a pair of touchdowns and three field goals off Winnipeg interceptions, while the Bombers recorded a pair of TDs after a Saskatchewan pick and fumble.

"It was just one of those games," Jones said. "It was one of the craziest games I've been involved with.

"I'm proud of our guys. It was a tough atmosphere."

Both teams finished the game without their starting quarterbacks playing in front of a soldout crowd of 33,134 at Investors Group Field.

Bombers QB Matt Nichols threw three interceptions and was replaced by Chris Streveler to start the second half. His Riders counterpart, Zach Collaros, was hurt on a sack and fumble early in the fourth quarter, forcing Brandon Bridge into action.

Collaros had to leave the field under concussion protocol. He was seen in the Riders' dressing room after the game in a T-shirt. Jones had no update on whether he had suffered a concussion.

Riders placekicker Brett Lauther booted a 15-yard field goal to regain the lead. A second interception by Streveler — Winnipeg's fifth — with just over a minute left in the game killed any momentum and the Bombers recorded their fourth straight loss.

Lauther sealed his team's fourth-straight win with his sixth field goal of the game with 46 seconds left.

Nichols completed 10-of-20 pass attempts for 165 yards and three interceptions before being replaced by Streveler, who was also 10-for-20 for 160 yards with one touchdown and two interceptions.

"It's unfortunate," Nichols said. "One of 'em, I was trying to throw it away and got hit as I was throwing it. The other I was throwing the hot throw, and Willie was just at the line of scrimmage and it was just bad luck, I guess."

The team is off next week on its second bye and Nichols said he'll come back and try to correct his mistakes.

"A couple bad games doesn't define me as a player," said Nichols, who was booed by the crowd. "It just sucks. You feel like you let your team down in a game that the rest of the team played good enough to win.

"It's something I've got to deal with, but something I can deal with. I'm a mentally strong person."

Bombers head coach Mike O'Shea was supportive of his starting quarterback, who also had two interceptions wiped out by a Saskatchewan penalty and a successful coach's challenge.

Saskatchewan defensive back Loucheiz Purifoy intercepted both Nichols and Streveler.

Collaros was 13-for-24 for 173 yards with one interception that Bombers defensive back Anthony Gaitor ran 55 yards for a TD. A sack of Collaros and a fumble led to a nine-yard TD catch by Bombers rookie receiver Daniel Petermann at 4:40 of the fourth quarter that cut Saskatchewan's lead to 26-24.

Bridge was 3-for-6 for 32 yards after taking over following Collaros' fumble.

"As a backup quarterback, you've got to be prepared to go in and finish the game," Bridge said. "The team leaned on me and we got the win.

"Kudos to the whole offensive line. I didn't even get touched. Kudos to the receivers for going out there and making the plays."

Justin Medlock booted field goals from 29 and 21 yards for Winnipeg.

Medlock was good on a the 29-yarder on the game's opening drive, a series aided by a 26-yard catch from rookie receiver Kenbrell Thompkins. However, with eight minutes left in the first quarter, Thompkins was taken off the field on a stretcher after getting tangled up with Riders defensive back Ed Gainey. He was back standing on the sidelines for the second half.