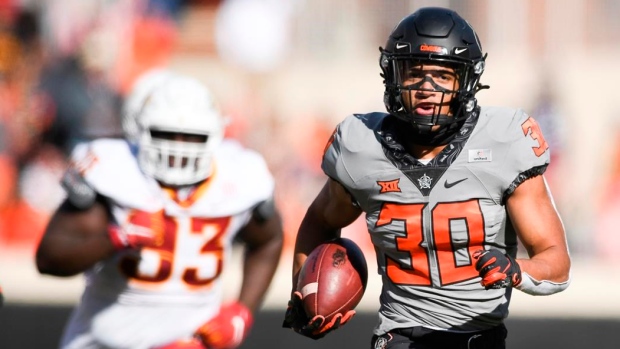 Chuba Hubbard is ready to finally know where his pro football career will begin.

For months, the native of Sherwood Park, Alta., has been working out, undergoing testing and conducting numerous virtual interviews in preparation for the 2021 NFL draft. Now, all the Oklahoma State running can do is wait to hear which team calls his name later this week.

The draft begins Thursday night in Cleveland with teams making their first-round picks. The second and third rounds will be held Friday night, with the remaining four rounds going Saturday.

"There's definitely a bunch of different emotions (heading into draft) but I'm just ready," Hubbard said in a telephone interview Wednesday. "I'm ready to play football, I'm ready to get this next step going, I'm ready for this next chapter and to see what's going to happen next."

The six-foot, 208-pound Hubbard is projected as a third- to fourth-round selection after rushing for 625 yards (4.7-yard average) and five touchdowns last season. After missing two games with a high ankle sprain, Hubbard decided to opt out of the remainder of the '20 campaign and declare for the draft.

It wasn't the ending Hubbard envisioned when he decided to remain in school after leading American university football with 2,094 yards rushing (6.4-yard average) and 21 TDs in 2019. But Hubbard proved earlier this month at Oklahoma State’s pro day he's healthy again, posting an official 40-yard dash time of 4.48 seconds although some social media reports had him running under 4.40 seconds.

"It's definitely been a long process," Hubbard said. "And with COVID, it's kind of made things a little different.

"A lot of stuff virtual, it's definitely been a different year."

Running back Chuba Hubbard's speed is undeniable. Whether he was running on the track or headed for the end zone he always found himself ahead of the pack. With his sights set firmly on the NFL, Hubbard is propelling towards his next finish line. Dave Naylor has more in the TSN Original: Breaking Free.

"I wrote down he's kind of a no-nonsense guy when you watch him run," Jeremiah said during a pre-draft conference call. "He runs with a real low pad level.

"Once he gets the ball in his hands he's tough to get down, (he) breaks a lot of tackles."

Hubbard is among six Canadians who could be selected this year. That would break the record of four set in 2014.

Holland is expected to be the first Canadian taken, with most projections listing him as a second-round pick. However, some mock drafts have the six-foot, 207-pound junior — who opted out of the 2020 season to prepare for the draft — as a late first-round selection.

"It's definitely special," Hubbard said. "That's what we strive for, that's the big goal, to help get exposure back in Canada for all the young (players) coming up.

"The fact we could have the most (Canadians) drafted ever is definitely special., We hope the numbers next year definitely continue to grow . . . it can't get much better than that."

But for Hubbard, being selected would be a very close second.

"Absolutely," Hubbard said. "I've been hoping and praying for this my whole life.

"The fact I'm actually here and able to achieve the dream I've been working on for all these years, definitely a sigh of relief."