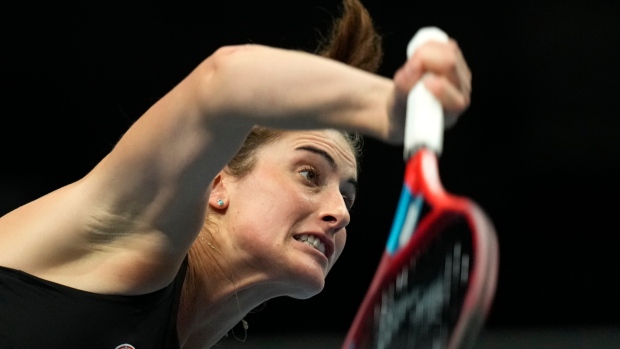 PRAGUE (AP) — Canada was bounced from group play at the Billie Jean King Cup on Tuesday with a 3-0 loss to Russia.

Canada’s confidence was boosted the day before when it upset defending champion France, but Russia with all of its players in the top 50 was too strong.

“In the second set, the chances (to win) were 50-50 and I’m just happy with the third set,” Pavlyuchenkova said.

Russia's dominance was completed in the doubles where Veronika Kudermetova and Liudmila Samsonova defeated Gabriela Dabrowski and Marino 6-3, 6-1.

Russia completes Group A against France on Wednesday.

Slovakia won a thrilling doubles match to upset the United States in their Group C tie.

Viktoria Kuzmova and Tereza Mihalikova teamed up to beat the U.S. pair of CoCo Vandeweghe and Caroline Dolehide 6-2, 6-7 (5), 12-10 to give Slovakia a 2-1 win in their first meeting in the competition.

“We're so happy we've made it,” Kuzmova said.

In Group D, Belinda Bencic and Viktorija Golubic won both singles matches on the way to a 3-0 win that eliminated Germany from the tournament in Prague.

Kuzmova and Mihalikova jumped to a 6-2, 3-1 lead before the Americans fought back, taking the second set's tiebreaker. The Slovaks finally prevailed in the super tiebreak, converting their second match-point.

Kuzmova had upset Shelby Rogers 6-4, 6-4 for Slovakia’s 1-0 lead. The 175th-ranked big hitting Slovak took a decisive break against her 42nd-ranked opponent at the seventh game of the second set before serving out the match.

Kuzmova also gained the only point Slovakia captured in a 2-1 loss to Spain on Monday.

“I feel great here," she said. "I like to play for Slovakia, it gives me so much more strength than at the other tournaments.”

Danielle Collins leveled the tie at 1 after a 6-3, 6-2 victory over Anna Karolina Schmiedlova.

“It was a little bit nerve breaking, I knew if I lost the match we would have lost the tie,” Collins said.

The Americans will face Spain in a must-win matchup on Wednesday.

Golubic took charge of the opening point for Switzerland, handing a 6-4, 7-5 defeat to Andrea Petkovic.

“I’m very happy and very relieved to get the first point for Switzerland," Golubic said. "It was a very tough second set so I’m very happy to close it out.”

The Swiss will complete the group stage against the Czech Republic on Thursday.

The 12 teams in the finals are divided into four groups of three teams. Only the group winners advance to the semifinals on Friday.

In Group B, 2019 runner-up Australia opened its account beating Belgium 2-1.

After Daria Gavrilova's three-set win over Greet Minnen, the 131st-ranked Storm Sanders on debut came from a set down to stun 18th-ranked Elise Mertens 3-6, 7-6 (5), 6-0. Sanders converted her second match point with the last of her 35 winners.

“That was a most incredible feeling, I’m still shaking,” Sanders said.