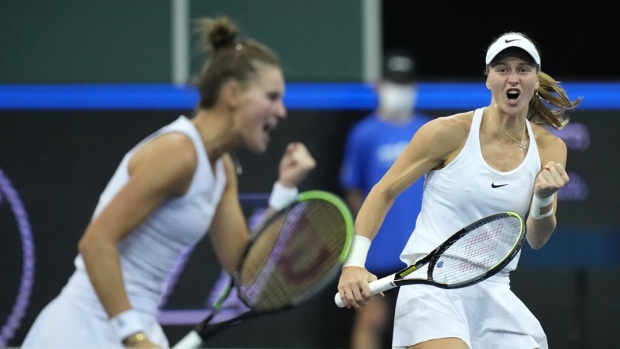 Veronika Kudermetova and Liudmila Samsonova defeated the American pair of Shelby Rogers and Coco Vandeweghe 6-3, 6-3 after the teams split the two singles matches of their semifinal.

Russia reached its first final since 2015 in the competition formerly known as the Fed Cup.

The Russians are seeking their fifth title.

They Russians will play Switzerland in Saturday’s final at Prague’s O2 Arena. The Swiss reached their first final since finishing runner-up in 1998 by winning both singles matches in straight sets to take an unassailable 2-0 lead against Australia.

The U.S. is the most successful nation in the competition with 18 trophies but Russia took a 1-0 lead when Samsonova rallied from a set down to beat Sloane Stephens 1-6, 6-4, 6-3.

Samsonova broke Stephens in the fifth game on the final set and again in the ninth game, converting her second match point when Stephens’ backhand went wide.

Samsonova, who also beat Stephens at this year's Wimbledon, was making her singles debut for Russia and said she was “a little bit nervous."

"But I was very happy for this opportunity, I’m so happy for the way it finished,“ she said.

For Stephens, it was her first loss in the competition since the 2017 final, ending a streak of five wins.

“It’s a little bit disappointing but overall I didn’t play bad and made her play better to beat me,” Stephens said.

Danielle Collins leveled the semifinal with a hard-fought 6-7 (9), 7-6 (2), 6-2 victory over Anastasia Pavlyuchenkova.

The American hit her 50th winner to convert her first match point after 2 hours, 42 minutes.

“I tried to be as resilient as I could and I tried to find the way,” Collins said.

Collins recovered from two breaks down in the opening set before the Russian saved a set point in the tiebreaker to take the lead.

In the second set, the two exchanged early breaks and held their serve until Collins dominated the tiebreak.

Collins also beat Pavlyuchenkova in their only previous encounter at the 2019 quarterfinal of the Australian Open.

Olympic champion Belinda Bencic clinched the win for the Swiss, delivering the second point by easing past Ajla Tomljanovic 6-3, 6-2..

“It's quite incredible," Bencic said. “I don't think we really expected it.”

Switzerland advanced to the semis from Group D, considered the toughest in the tournament, defeating both the Czech Republic and Germany on the way.

“We're so happy to be in the final," Bencic said. "We cannot believe it yet.”

Jil Teichmann put Switzerland 1-0 up by beating Storm Sanders 6-0, 6-3, closing out the match with her seventh ace.

“I played really good, I went for my shots, I played aggressive and I'm very happy about my game," Teichmann said.

The 12 teams in the tournament were divided into four groups of three in a new competition format. Only the group winners advanced to the semifinals.