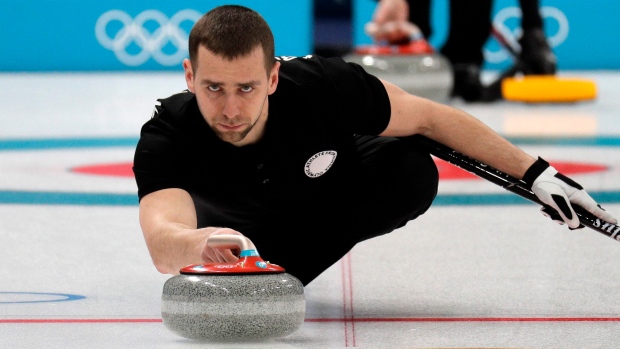 MOSCOW — The Russian curler stripped of a bronze medal for doping at last year's Winter Olympics, Alexander Krushelnitsky, has dropped plans to appeal against his four-year ban.

Krushelnitsky's agent, Andrei Mitkov, said on Friday in a statement that "yesterday (Krushelnitsky) decided to abandon the appeal to (the Court of Arbitration for Sport). Perhaps one day he will explain why."

Mitkov had been appealing for donations to fund the appeal, though the Russian Curling Federation told Russian media the appeal would almost certainly fail.

Krushelnitsky won bronze with his wife Anastasia Bryzgalova in the mixed doubles event — Russia's first medal under the "Olympic Athletes from Russia" name imposed as punishment for earlier doping scandals — but they lost the medal when he tested positive for meldonium. Krushelnitsky argued he was spiked with meldonium by an unknown person, but didn't identify any suspects.

CAS banned him for four years last month, saying his "arguments were not supported by reliable or credible evidence." That rules him out of the 2022 Winter Olympics in China.

Russian athletes were not allowed to compete under their own flag in Pyeongchang as punishment for past doping offences. They had to pass extra vetting before the games and competed in neutral uniforms.

Krushelnitsky's doping case and another involving a bobsledder helped delay the lifting of the sanction until after the closing ceremony. The bobsledder, Nadezhda Sergeeva, accepted an eight-month ban in October after claiming her failed test was down to a contaminated supplement.

Only two other countries recorded a single doping case each in Pyeongchang, one involving a Japanese speedskater, the other a Slovenian hockey player.