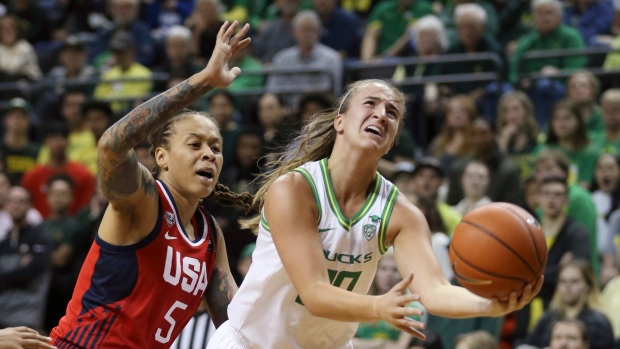 Sabrina Ionescu, right, goes up for a shot ahead of United States' Seimone Augustus , The Canadian Press

EUGENE, Ore. — Top-ranked Oregon stunned the U.S. women’s national team 93-86 on Saturday to hand the Americans’ their second loss to a college team in program history.

The Americans haven’t lost a major international game since falling in the semifinals of the 2006 World Championships to Russia. The only other loss to a college program came in 1999 when Tennessee won on a shot by Kara Lawson, who was a freshman that season, with 10 seconds left. The U.S. won the next 20 college games after that loss to the Lady Vols before Saturday.

Defeats have been extremely rare for the U.S. over the past decade with the last two coming in an exhibition game against France in 2014 and a loss to the Czech Republic during a European tour in 2011.

The Americans were playing the fourth game of their college tour that started in Stanford last Saturday. Since that win over the Cardinal, the Americans have traveled nearly 5,000 miles while playing against Oregon State, Texas A&M and now Oregon.

Sabrina Ionescu scored 25 of her 30 points in the second half to lead the Ducks. Her layup to end the third quarter gave Oregon a 68-67 lead and started a 15-2 run that Satou Sabally capped with a layup with 6:26 left. Sue Bird then hit a 3-pointer on the other end, igniting a 15-5 U.S. spurt that got the Americans to 87-84 with 1:02 left after a layup by Napheesa Collier.

But Sabally, who finished with 25 points, answered with a layup and the U.S. could get no closer.

The U.S. built a 35-24 lead midway through the second quarter before Oregon rallied to within four at the half. Ionescu had her only five points of the half in that stretch hitting her first basket of the game on a layup with 2:15 remaining in the second quarter. She then had a three-point play with 55 seconds remaining that got the Ducks within three.

Nneka Ogwumike had 19 points and 14 rebounds for the U.S., which now will head to Argentina to play in a FIBA Pre-Olympic qualifying tournament. Diana Taurasi add 17 and Sylvia Fowles had 11. Besides Ogwumike and Fowles, the U.S. was missing most of its post players that potentially would be on the Olympic team, including WNBA MVP Elena Delle Donne, Brittney Griner, Tina Charles, Breanna Stewart and A’ja Wilson.

Wilson had been playing on the earlier part of the college tour before heading home to deal with the death of a family friend.