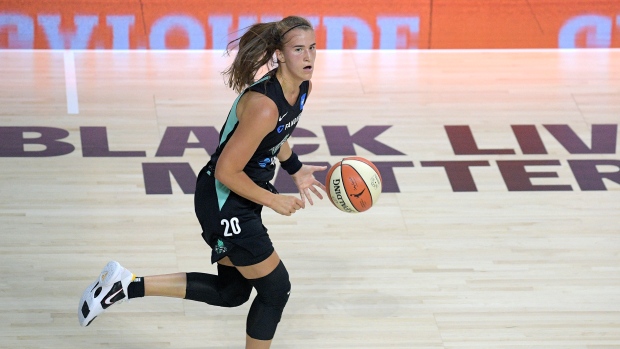 NEW YORK (AP) — Sabrina Ionescu had 25 points and six assists and sparked a late run to help the New York Liberty beat the Connecticut Sun 81-79 on Saturday night in the season opener for both teams.

Natasha Howard scored 16 points, Sami Whitcomb had 15 points and five assists and Jocelyn Willoughby added 13 points for New York. Willoughby — the No. 10 overall selection in the 2020 WNBA draft — did not play last season after suffering a torn left Achilles tendon in a preseason scrimmage.

Ionescu was fouled as she hit a 12-foot jumper and hit the free throw to give the Liberty a 71-70 lead with 3:51 to play. Jasmine Thomas answered with a three-point play to put Connecticut back in front 10 seconds later, but Ionescu followed with a 3-pointer and a driving layup to make it 76-73 with 2:31 remaining and the Sun trailed the rest of the way.