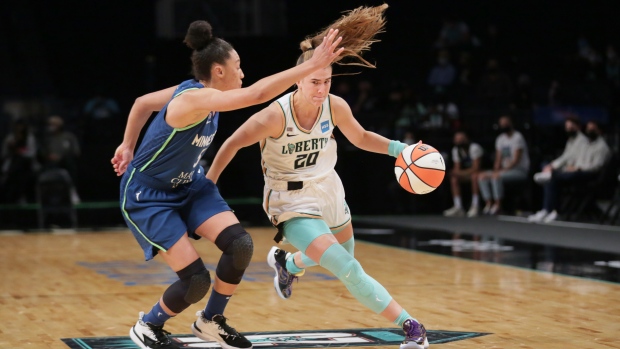 NEW YORK -- — Sabrina Ionescu had the first triple-double of her WNBA career to lead New York to an 86-75 win over the Minnesota Lynx on Tuesday night, giving the Liberty their first 3-0 start in 14 years.

Ionescu, who had an NCAA record 26 triple-doubles in college, recorded the first in franchise history with 26 points, 12 assists and 10 rebounds.

The No. 1 pick in the 2020 draft became the 10th player in league history to have a triple-double, and first since Chelsea Gray did it in 2019. The Liberty's young star did it in her second season — the earliest in a career that it had ever been done. Sheryl Swoopes, who had the league's first triple-double, accomplished the feat in her third season.

Ionescu has now had a game-winning buzzer beater in her first home game Friday and a triple-double in her second game at Barclays Center to help the Liberty to their best start since 2007, when they won their first five games.

New York trailed 45-43 at the half before outscoring Minnesota 19-10 in the third quarter to go up 62-55 heading to the final period.

The Liberty expanded on that lead and Ionescu reached the triple-double, corralling her 10th rebound with 5:24 left in the fourth. She then nailed a 3-pointer at the other end to extend the advantage to 75-65. Minnesota couldn't get closer the rest of the way.

The Liberty welcomed back Kiah Stokes, who was playing her first game with New York after completing her overseas season. She checked in midway through the first quarter receiving a nice hand from the crowd.

Both teams were still missing key players because of COVID-19 protocols. New York's Natasha Howard and Minnesota's Napheesa Collier finished their overseas seasons and needed a few more negative coronavirus tests to rejoin their teams. They both are expected to be back later this week.

Minnesota was without Natalie Achonwa because of a knee injury. The Lynx were also missing rookie Rennia Davis, who has a stress fracture in her left foot.

Tuesday night's game marked the return to New York for Lynx assistant coach Katie Smith, who was the Liberty's head coach before getting let go after the 2019 season. ... The first quarter was full of runs as New York scored 15 straight after trailing 4-0, and then Minnesota had 12 in a row to make it a two-point game after one period. Neither team had more than a five-point lead before the half.