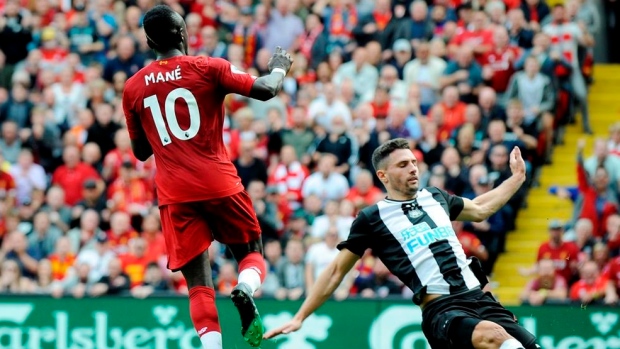 LIVERPOOL, England — Sadio Mane scored twice as Liverpool came back from a goal down to beat Newcastle 3-1 on Saturday and extended its perfect start to the Premier League season with a fifth straight win.

"We needed 20-25 minutes to really arrive in the game," Liverpool manager Jürgen Klopp said. "They scored a goal, which was a wonderful finish, and then we started. When we changed the rhythm it was much better and we deserved the three points."

Newcastle targeted Liverpool right-back Trent Alexander-Arnold from the start in a bid to deny the Premier League leader a fifth win in as many league games.

The strategy bore fruit when Willems picked up a pass from Christian Atsu, cut inside past Alexander-Arnold and blasted a shot into the top corner for a surprise opening goal in the seventh minute.

The Senegal winger received the ball from Andy Robertson in the 28th and curled it into the top-right corner from a tight angle.

Mane needed some luck for his second goal 12 minutes later. As he dribbled toward goal, the ball deflected off advancing goalkeeper Martin Dubravka and bounced in front of goal to leave Mane a simple finish. Mohamed Salah made it 3-1 after he charged through the Newcastle defence in the 72nd.

Mane has now scored six goals in six games this season for Liverpool, which starts its defence of the Champions League title at Napoli on Tuesday.

Klopp had put Firmino on the bench, but he came on when Divock Origi was injured and made an immediate impact.

The Brazilian sent a through ball for Mane to score Liverpool's second and also set up Salah's third goal with a fine flick.

"We don't want to leave Bobby Firmino out but, from time to time, we have to be sensible and do it, especially after long trips and that's why we did it. Obviously when he came on it helped," Klopp said.

Mane put the ball in the net in the 88th for what would have been his hat trick, but it was disallowed for an earlier offside by Firmino.