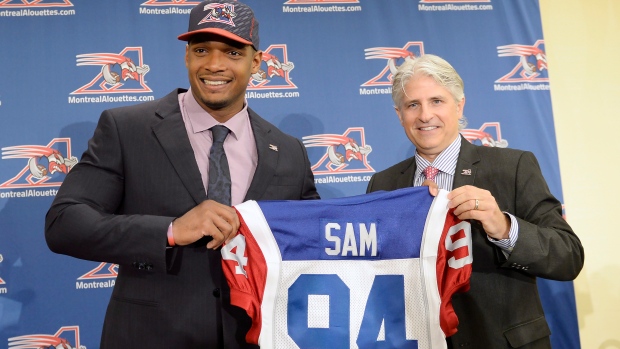 The Alouettes released a statement on Friday saying the rookie defensive end has been given special permission to return home to Texas after several media outlets noted his absence practice.

"With all due respect for Michael Sam, the nature of this decision will remain confidential," said the statement. "The Montreal Alouettes fully respect Michael Sam's decision and rally around him to offer him all time and support needed.

"The team has left the door open and Michael is welcome to come back whenever he feels ready."

The club added that they they will have no further comment on Sam at this time.

The 25-year-old Sam was selected in the seventh round of the 2014 NFL draft by the St. Louis Rams, becoming the first openly gay player chosen by an NFL team. He was later cut by the Rams and from the Dallas Cowboys' practice roster.

He is part of a tiny group of professional athletes who have chosen to go public about their sexual orientation. Retired NBA player Jason Collins came out in April 2013 while Los Angeles Galaxy soccer star Robbie Rogers is the lone out player in Major League Soccer. There are no openly gay players in Major League Baseball or the NHL.

A star at Missouri in college, Sam earned SEC Defensive Player of the Year honours in 2013 before turning pro.