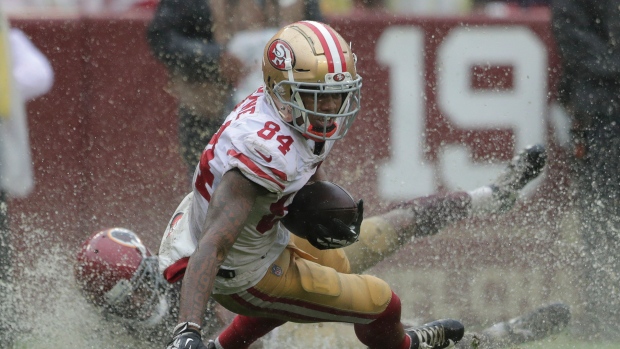 LANDOVER, Md. — Nick Bosa sacked Case Keenum to run out the clock, belly flopped onto the field and rode it like a Slip 'N Slide.

"Slid way farther than I thought was going to slide," he said.

Bosa and the San Francisco 49ers Slip 'N Slided their way to an ugly 9-0 win at the Washington Redskins in steady rain and driving wind Sunday to remain undefeated. It wasn't pretty, but San Francisco is 6-0 for the third time in franchise history, and first since 1990.

"It takes you back to being a kid: You're out there, you're sloshing around and your shoes are full of water and mud," cornerback Richard Sherman said. "It's still a kid's game at the end of the day. Guys had a lot of fun slipping and sliding out there, but winning's always fun."

San Francisco coach Kyle Shanahan thought about flopping onto his old home field with his players, but watched them gleefully instead after beating the team that fired him and his father, Mike, in 2013. Shanahan knew from his time as Washington's offensive co-ordinator how bad the FedEx Field surface can be in normal weather and adjusted along the way.

"It's not just throwing and catching, but it's tough to stand up and block people, too," Shanahan said. "Everyone knows how the field always is and just the way it was raining from last night made it a tough game for both sides."

Shanahan's bunch didn't look like an unbeaten powerhouse in horrific conditions that made life difficult on quarterback Jimmy Garoppolo and the entire offence. Garoppolo bounced back from a dreadful first half to finish a passable 12 of 21 for 151 yards passing.

Robbie Gould made field goals from 28, 22 and 29 yards to provide the only offence of the game.

San Francisco's defence continued its dominant run after holding the Los Angeles Rams to seven points last week and the Cleveland Browns to three before that. The Niners are the first team since 2005 and sixth since 1990 to limit an opponent to seven or fewer points and fewer than 200 net yards of offence in three consecutive games.

After the team's first shutout since Week 1 of the 2016 season — forcing Adrian Peterson to fumble in the third quarter — defensive lineman DeForest Buckner was upset the defence only got one turnover.

"Guys are just owning their jobs, not pointing any fingers when things go wrong," Buckner said. "Everybody's seeing what we can do better to help the D and we're just feeding off each other's energy."

The weather seemed a perfect fit for interim Redskins coach Bill Callahan's run-first, run-second and run-third mentality. Washington (1-6) started the game with 10 rushing plays and Peterson ran for 81 yards on 20 carries, but they were shut out for the first time this season.

"It was tough sledding," Peterson said. "We knew coming in that, especially with the rain, it was going to be that type of game, the field was muddy. I felt like we started off well, had an opportunity to put points on the board. We weren't successful with that."

Redskins lineman Ereck Flowers wasn't sure why 49ers players did mud angels and slid all over the field in celebration, but put it on Washington for letting it happen.

"Winning is the cure for everything," Flowers said. "If we won the game, there wouldn't be no sliding."

Among those who braved the rain, more than half were 49ers fans — a trend that has haunted the Redskins this season. A "Let's go Niners!" chant broke out in the fourth quarter among those in Jerry Rice, Ronnie Lott, Joe Montana and other jerseys from the organization's storied past.

The Redskins had alumni in town for their annual "Homecoming Weekend," but lost their eighth in a row at FedEx Field.

Both offences struggled mightily in a sloppy first half.

Washington took the opening drive and chewed up more than eight minutes on nine rushes and just one pass, but came up empty when Dustin Hopkins missed wide right from 39 yards. Peterson gained 57 yards on the ground for Washington but just 8 after the first drive.

Gould missed from 45 yards in the second quarter. For the half, the 49ers totalled 68 yards as Garoppolo finished 3 of 10 with 10 yards passing and were shut out in the game's first 30 minutes for the first time this year.

49ers: RB Matt Breida cleared concussion protocol and returned after being evaluated for an eye injury. ... WR Marquise Goodwin was evaluated for a concussion in the first half but was held out. ... Starting offensive tackles Joe Staley (leg) and Mike McGlinchey (knee) remained out.

49ers: Look for the second 7-0 start in franchise history when they host the Carolina Panthers next Sunday.