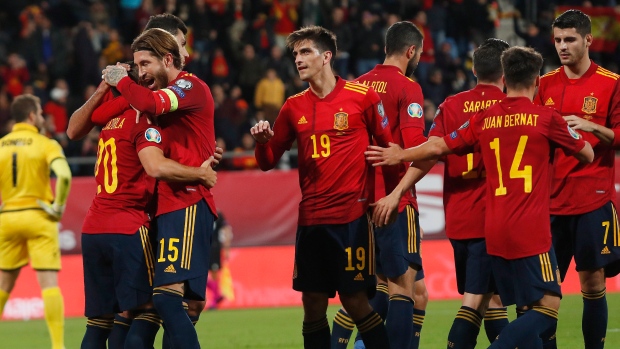 Cazorla returned to Spain in May in a surprising call-up. The 34-year-old former Arsenal playmaker hadn’t played for his country since 2015 due to a string of serious injuries that threatened his career.

But Cazorla has played well since his return to the field with Spanish club Villarreal and is becoming an important piece of Robert Moreno’s squad for Euro 2020.

“What Santi’s achieving, his form, after what he went through for nearly three years with his terrible injury problems, is exceptional,” Moreno said. “Without guys like him and Raúl (Albiol) and Sergio (Ramos) it’s hard to win tournament semifinals and finals.”

Spain qualified for the tournament in October, so the match against lowly Malta was a great chance for Moreno to give some young players their opportunity.

Álvaro Morata got Spain going in the 23rd minute when he scrambled a corner kick around goalkeeper Henry Bonello. The goal comes with Morata on a six-game scoring run for club Atlético Madrid.

Cazorla doubled the advantage four minutes before halftime when he received a pass from Moreno and shot off the post and into the net.

Malta defended as best it could for the first hour, but Spain converted its overwhelming possession into a quick succession of goals to turn it into a demolition.

Torres, a Villarreal central defender, chested a ball home two minutes after going on in the 60th. Sarabia made it 4-0, and Olmo, a Dinamo Zagreb midfielder, skillfully rounded Bonello to get his strike. Moreno and Jesús Navas completed the rout.

“The way they are playing right now, I think they will win the tournament next summer,” Malta coach Ray Farrugia said.