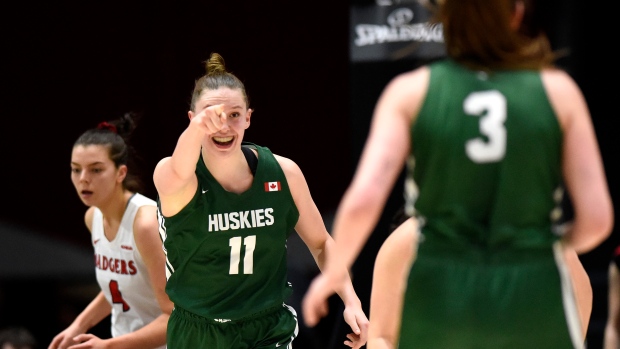 The No. 1 Huskies defeated the No. 2 Brock University Badgers 82-64 on Sunday to claim their second ever U Sports women's basketball title.

"We played our best basketball at the right time," said Saskatchewan head coach Lisa Thomaidis, who has led the team for 21 years and coached the Huskies to the national championship tournament 12 times in the last 13 years.

"We really peaked at this tournament."

This is the Huskies' third time in the gold-medal game in the last five years. They won their first title in 2016, and in 2018 finished second with a team hobbled by injuries. Thomaidis said the 2018 loss was devastating but helped contribute to Sunday's success.

"I think sometimes it takes those kinds of disappointments to really learn from and propel you to greater performances," she said.

The Huskies dominated the game from start to finish, trailing Brock only briefly off the start, and by a single basket for about 10 seconds in the second quarter, before blowing back into a dominant lead. They nearly doubled the Badgers in rebounds, and outshone them in every scoring statistic from field goals to free throws.

"We have a lot of weapons for other teams to have to stop and I think that was on full display," said Thomaidis.

"They're great inside, they've got great shooters, they're athletic, they challenge the ball, they penetrate," he said. "We got outplayed. They're a better team. Sometimes you just have to realize that you're not as good as the other team."

Fifth-year Saskatchewan guard Sabine Dukate sank eight three-pointers to lead her team to gold with 24 points, and was named tournament MVP. Fourth-year forward Summer Masikewich contributed 20 points and nine rebounds to be named player of the gold-medal game for the Huskies.

Dukate, who grew up in Latvia and arrived in Saskatoon to play for Thomaidis five years ago knowing nothing about the city or the university, said it is special to start and end her five years as a Husky with a gold medal.

Dukate is the team's top three-point shooter, holding the record for the most three-pointers scored in a single season for Saskatchewan with 67. She also has the most scored over her varsity career, with 260 three-point shots made in her five years. It took Dukate a few misses early before she found her stride but she said Thomaidis tells them they have to take their shots when they can and she did.

"I just kept shooting," she said.

Thomaidis, who is also the coach of the Canadian national women's team, said by the time the team gets to the championship, her job is mostly done and it's up to the players to trust their preparation and not make things complicated.

"There's not much I can control at this stage of the game," she said. "They've put in the work."

The Badgers missed some easy shots early in the second half and could not keep Saskatchewan off the three-point line.

Brock finished 17-5 for the season and were ranked sixth nationally, but came on strong throughout the playoffs, making two upsets in the Ontario conference playoffs to win the provincial title for the first time in school history.

Fifth year Brock point guard Melissa Tatti said Sunday she had no regrets about the season, which will be her last as a Badger.

"We never thought we would be here to begin with," said Tatti. "I know we didn't play our best game. They're a crazy good team."

Still the disappointment for Brock was on full display at the TD Place Arena. While the Huskies were posing for photos and climbing a ladder one-by-one to cut down the net as a souvenir, Badgers fans were dumping armloads of red inflatable lightning sticks into the garbage, with a grimace.

This story by The Canadian Press was first published March 8, 2020.