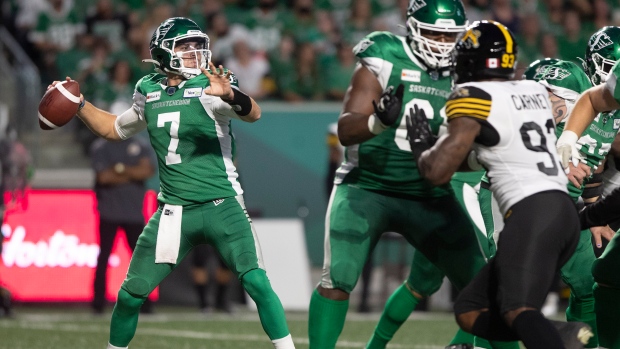 REGINA — The Saskatchewan Roughriders made sure to play a complete 60 minutes Saturday as they defeated the Hamilton Tiger-Cats 30-8 at Mosaic Stadium.

In last week’s season opener against the B.C. Lions, the Riders raced out to a 31-0 first half lead, only to have to withstand a furious B.C. comeback to hold on for a 33-29 victory.

The Riders trailed 1-0 after the first quarter Saturday but that would be the last time they trailed in the game. They held a 17-8 halftime lead and a 27-8 lead after three quarters.

Quarterback Cody Fajardo had an impressive game for the Riders, completing 17-of-24 passes for 222 yards and two touchdowns. He also rushed seven times for 66 yards.

Rookie defensive end Jonathan Woodard recorded three sacks for Saskatchewan. The six-foot-five, 271-pound player out of Central Arkansas gave the Riders a little breathing room late in the first half when he sacked Hamilton (0-2) quarterback Jeremiah Masoli and forced a fumble that was recovered by A.C. Leonard on the Ticats' eight-yard line.

On the next play, Fajardo connected with Picton on an eight-yard scoring pass. It was the first CFL touchdown for Picton, a Regina product who starred for the University of Regina Rams before joining the Riders.

Hamilton’s Brandon Banks, the CFL’s Most Oustanding Player in 2019, had a quiet first half, recording three catches for 20 yards and one rushing attempt for 12 yards. He finished the game with five catches for 30 yards.

Masoli scored Hamilton’s first touchdown on a quarterback sneak but it wasn’t as easy as that sounds.

Hamilton ran four consecutive QB sneaks from the Saskatchewan one-yard line. The Riders had one stop for no gain, and were twice penalized for being offside. The second penalty negated a Masoli fumble that was recovered by Hamilton but would have left the Ticats facing a second and goal situation from the six-yard line.

Fajardo gave the Riders their first lead of the game early in the second quarter. With the ball on the Hamilton 14-yard line, Fajardo faked a handoff to William Powell and then sprinted into the end zone for the score.

The Ticats replaced Masoli with backup Dane Evans late in the third quarter. Masoli finished 17-of-25 passing for 135 yards and two interceptions. Evans was 3-for-10 passing for 21 yards.