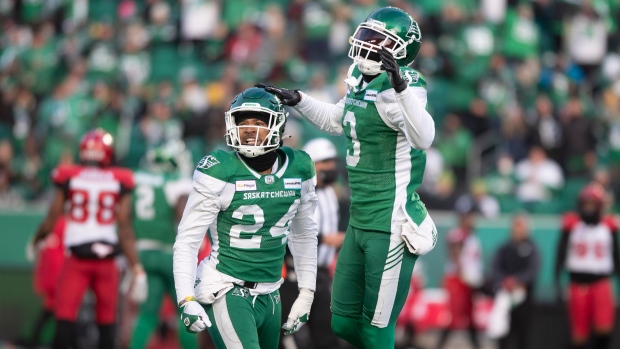 Jamal Morrow’s 69-yard punt return is the difference as the Saskatchewan Roughriders lead 10-8 over the Calgary Stampeders at halftime of their divisional  matchup.

Roughriders defensive Ed Gainey had two interceptions and quarterback Cody Fajardo threw for 37 yards and three interceptions in the first half.

The Roughriders appeared to strike first after Stampeders kicker Rene Paredis missed a 48-yard field goal and it was returned by Morrow for a 124-yard touchdown. However, Jeremy Clark was called for an illegal block which brought the ball back to the Roughriders’ 10-yard line.

One play later, Cody Fajardo was intercepted by the first of Jonathan Moxie’s three interceptions and then Ka’Deem Carey’s five-yard touchdown run gave the Stampeders an early seven-point lead.

Brett Lauther brought the Roughriders within four points on a 17-yard field goal near the end of the first quarter.