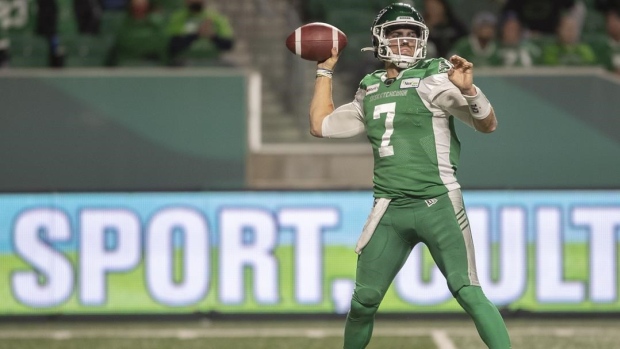 They've proven to be a tough out at Mosaic Stadium but Cody Fajardo and the Saskatchewan Roughriders are poised to become CFL road warriors.

Saskatchewan (4-2) will play six of its remaining eight regular-season games on the road, starting Saturday night in Vancouver against the surging B.C. Lions (4-2). The Riders will face West Division opponents in six of those contests (including the Calgary Stampeders three times), with four of the inter-conference matchups being on the road.

And those games crucial for Saskatchewan, which is a solid 4-1 at Mosaic Stadium but 0-1 away from it. How the Riders fare on the road could go a long way toward determining if they'll finish the regular season first or second in the West Division and secure a home playoff game.

Saskatchewan is coming off a 30-16 home win last week over Toronto. And while Fajardo figured in three TDs (two passing, scoring another), it was the defence's two goal-line stands against the Argos that anchored the victory.

Fajardo finished 21-of-31 passing for 212 yards and an interception while rushing eight times for 58 yards. William Powell anchored Saskatchewan's ground attack, running for 122 yards on 21 carries.

The Riders face a Lions squad that's won three straight. Veteran quarterback Michael Reilly has thrown for over 300 yards in each of the victories.

Reilly finished 21-of-25 passing for 308 yards and two TDs in B.C.'s 27-18 road win over Montreal last week. Willie Whitehead had six receptions for 133 yards and a touchdown.

Whitehead leads in the CFL in receiving with 30 catches for 554 yards and two touchdowns.

Running back William Stanback accounted for 139 of Montreal's 183 rushing yards, but the Lions' defence intercepted Alouettes starter Vernon Adams Jr. twice in the game. B.C.'s unit has only allowed two touchdowns in its last five games and hasn't given up a second-half TD this season.

The Lions' offence is ranked second in the CFL in offensive points per game (23.7), offensive touchdowns (14) and first in yards per play (7.1). Reilly is second overall in passing yards (1,601) and TDs (eight) but is the league leader in passing efficiency (119.5).

Saskatchewan's defence leads the CFL in sacks (20) and is third in turnovers forced (17). But offensively, B.C. has surrendered a league-low six turnovers.

The Lions are also no slouches in the forced turnovers department, standing second overall with 19. The unit has also recorded 10 interceptions, tied with Winnipeg for most in the CFL, and is allowing just 16.3 offensive points per game (second-fewest).

This will only be the Lions' third home game -- they're 1-1 -- but they've posted a solid 3-1 road record. And both teams come in with 1-2 marks within the West Division but Saskatchewan's victory was a season-opening 33-29 home decision over B.C. on Aug. 6.

The Lions will be at B.C. Place for five of their remaining eight regular-season games, including the next three straight.

At Ottawa, David Watford will make a second straight start for Hamilton (3-3), which is coming off a 23-17 home win over Calgary. Linebacker Simoni Lawrence had the lone TD for the Ticats with a 15-yard interception return. Watford finished 19-of-22 passing for only 149 yards while rushing for 35 yards on 10 carries. Dominique Davis makes a second straight start for Redblacks (1-4), who've dropped four consecutive games but haven't played since a 45-13 road loss to B.C. on Sept. 11.

At Toronto, head coach/playcaller Khari Jones returns for Montreal (2-3) after missing last week's loss to B.C. due to a positive COVID-19 test. The Alouettes top the CFL in rushing (149.4 yards per game), net offence (385.6 yards) and offensive points (23.8) but are eighth in offensive points allowed (24.0). The Argos (3-3) are sixth in offensive points scored (18.5 per game) but also tied with Calgary for most turnovers (18) while the Als (seven) are tied with Winnipeg for second-fewest. They've also allowed a league-low five sacks.

This report by The Canadian Press was first published Sept. 21, 2021.