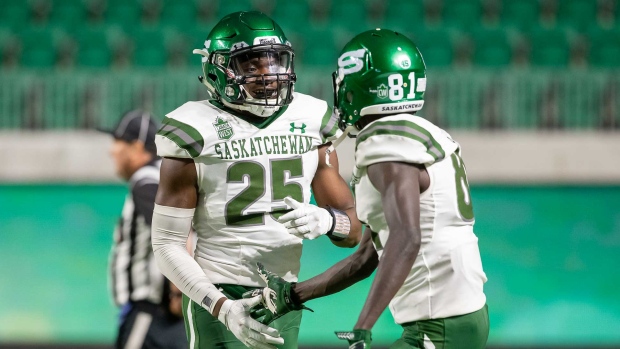 Nelson Lokombo (25) , Courtesy of the University of Saskatchewan

Saskatchewan Roughriders 2021 CFL Draft pick Nelson Lokombo will work out for the Washington Football Team on Thursday, according to TSN's Farhan Lalji.

#Riders draft picks Nelson Lokombo & Logan Bandy are headed to DC to work out for #WFT tomorrow, ahead of the team’s mini-camp that begins on Friday. They could still earn mini-camp invites. Teams are only allowed to bring in max 5 undrafted/signed players to mini camps this year

Lokombo's workout comes ahead of Washington's mini-camp that begins on Friday. If the 22-year-old defensive back has a successful workout on Thursday and earns an invite to Washington's mini-camp, he will be only one of five undrafted or signed rookies that the team is allowed to bring in for camp this season.

Lokombo, who was drafted second overall by the Roughriders earlier this month, played three seasons, at the University of Saskatchewan. In 30 career games with the Saskatchewan, Lokombo amassed 115 tackles, 10 interceptions and three sacks, and two forced fumbles.

Lokombo's older brother, Boseko, is a member of the BC Lions.