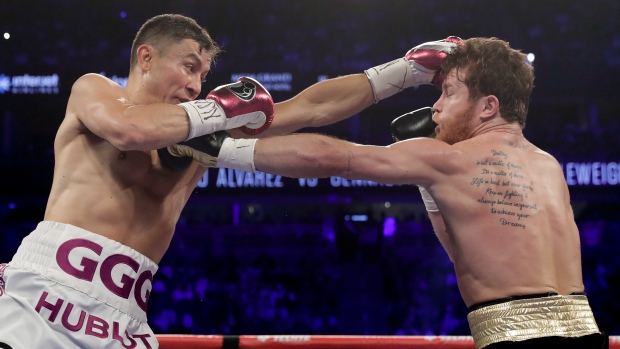 Saul "Canelo" Alvarez intends to avenge his loss earlier this month to Dmitry Bivol, but there's a more pressing matter.

DAZN announced on Tuesday that the 31-year-old Guadalajara-born fighter will take on Gennady "GGG" Golovkin on Sept. 17 with the duo's five world middleweight titles on the line.

A venue for the fight has yet to be announced.

The bout will be the third between the two men and almost five years to the day of their first meeting.

On Sept. 16, 2017, the two men fought to a 12-round draw in Las Vegas. A year later, Alvarez defeated Golovkin by majority decision.

The 40-year-old Golovkin (42-1-1, 37 wins by knockout) is coming off of a nine-round TKO victory over Ryoto Murata in Saitama, Japan in April.

Alvarez (57-2-2, 39 wins by knockout) lost his WBA super lightweight title on May 7 to Bivol by unanimous decision in his first loss since a majority decision defeat to Floyd Mayweather in 2013